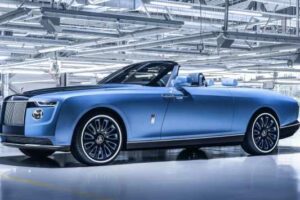 The new Rolls-Royce Boat Tail features a hosting suite under the rear deck, with a picnic hamper, rotating cocktail tables and a fold-out parasol

Rolls-Royce has revealed its next one-off coachbuilt model. It’s called the Boat Tail, and it follows on from the 2017 Rolls-Royce Sweeptail, with similar yesteryear styling cues and an equally laborious hand-built manufacturing process.

As the name suggests, the Rolls-Royce Boat Tail uses luxury yachts as a starting point for its design. Rolls-Royce says the car’s windscreen is inspired by the visor on powerboats, while the rear end creates a “gesture that recalls a motor launch rising out of water under power.”

The customer that commissioned the project is the owner of the original Rolls-Royce Phantom II Boat Tail, which was built back in 1932. This modern recreation adopts elements of its grandfather’s design, with a similarly tapered tail and an upswept rear bumper.

Like the company’s heritage models, this coachbuilt Boat Tail has running boards, while the rear deck is covered in Caleidolegno veneer, which is a material normally applied to the dashboard in Rolls-Royce’s series production models. The company says this decision was “a nod to the typical wooden construction of yachts – both old and new.”

At the push of a button, the deck lid splits in two and opens to reveal what Rolls-Royce calls a “hosting suite.” It’s an elaborate picnic hamper, filled with custom engraved silverware, glasses and a refrigerator that’s specially designed to hold Armand de Brignac champagne bottles. There’s even a fold-out parasol and rotating cocktail tables.

The Boat Tail is also a drophead model, but not in a form we’re used to. Instead of a folding fabric roof, there’s a removable one-piece hardtop. If the weather turns sour when the car is away from its roof, Rolls-Royce has engineered a temporary tonneau cover to keep the cabin dry.

Given the nautical theme the car is painted in a metallic blue shade. The alloy wheels are painted to match, while the cabin is trimmed in light blue leather. However, the front seats are trimmed in a slightly darker blue leather, supposedly to recognise the car’s “driver focussed intent.”

There are also a few bespoke touches on the car’s dashboard, the most notable of which is a pair of mounts to hold two unique BOVET watches (one for the owner and one for his wife). There’s also a handmade case in the car’s glove box, which has been specially designed to hold one of the owner’s treasured Montblanc pens.

The rest of the car’s interior features the company’s usual accoutrements, such as a wood veneer dashboard, a powerful air conditioning system and a 15-speaker stereo system with specially designed resonance chambers that improve sound quality.

The Boat Tail measures 5.8 metres long and is based on a heavily modified version of the Phantom’s aluminium space frame architecture. Rolls-Royce has confirmed that it’ll share the same twin-turbocharged 6.75-litre V12 engine as the Phantom.

Technical specifications are yet to be confirmed, but the Phantom’s engine produces 536bhp and 900Nm of torque.