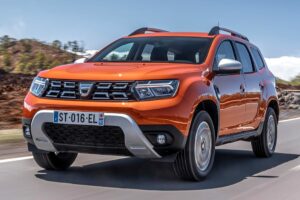 A facelifted version of the Dacia Duster SUV has been launched for 2021. The revised model will go on sale later this summer, sporting a few styling changes and a little more technology, which the brand hopes will keep the car ahead of other budget offerings, such as the MG ZS.

Dacia hasn’t yet confirmed the new Duster’s pricing or trim-level structure, but we expect the car will stay close to its current value proposition. As such, the most basic version should be priced from around £11,500.

Styling updates include a new radiator grille and some fresh headlamps, which share the same Y-shaped LED daytime running lights as the latest Sandero. There’s also a new rear spoiler and some redesigned alloy wheels, sized at either 16 or 17 inches.

Dacia says all of these updates have been designed to make the revised Duster slightly more aerodynamic than its predecessor. They’re coupled with some efficiency tweaks, (such as lower friction wheel bearings and new tyres), and contribute to a 5.8g/km reduction in CO2 emissions on the four-wheel drive model.

The Duster’s interior has received a more noticeable redesign, with Dacia introducing new upholstery and slimmer headrests, which Dacia says are more ergonomic and allow better visibility. There’s also a new centre console, which features a pair of USB sockets, a 1.1-litre storage bin and a retractable armrest.

Dacia has fitted a new eight-inch infotainment system, too, which can be specified with two tiers of supporting technology. The first, called Media Display, adds a six-speaker stereo, a DAB radio, bluetooth connectivity, voice recognition and a pair of USB sockets.

The range-topping petrol is the 148bhp TCe 150, which shares the same 1.3-litre unit as the TCe 130. It’s also front-wheel drive, but is only available with a new six-speed dual-clutch automatic gearbox.

There is still a diesel option in the range – the 113bhp 1.5-litre four-cylinder dCi 115. It’s available with a six-speed manual gearbox only, but buyers get a choice of either front or four-wheel drive. Dacia will also continue to offer the car with an LPG-compatible powertrain,  called Bi-Fuel.

It’s based on the firm’s 1.0-litre three-cylinder petrol engine and features front-wheel drive and a manual gearbox. The set-up now comes with a larger gas tank than before and when filled with both petrol and LPG, the Bi-Fuel offers a range of more than 760 miles. It also produces slightly more power than it’s pure-petrol stablemate, offering 99bhp.