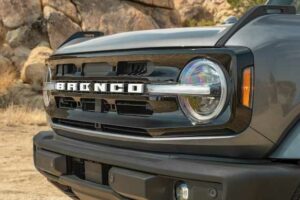 The new Ford Bronco is in high demand, which makes its early launch issues all the more glaring: Ford is replacing all the hardtops on already-sold Broncos, pushing back the reservations of those still waiting until 2022 or beyond, and regular people likely won’t be able to walk into a Ford dealer and simply purchase one off the lot for years. As with most things in life, having money helps grease your way through these problems. Need proof? Look at Mecum’s car auction held this weekend in Dallas, Texas.

At the auction, a nearly brand-new 2021 Ford Bronco First Edition hammered $126,500. We say “nearly” because the Bronco showed 160 miles on its odometer when listed and came from a “private collection.” This ultra-short-term collector was even nice enough to leave the floor mats in the factory plastic packaging in the cargo area!

Paying six figures for a Bronco that starts—before any dealer markups, which are running in the tens of thousands these days—at a mere $63,000 is nuts. But think about it: This is, effectively, the only way to get a new Bronco short of stealing one (we do not, of course, recommend resorting to crime for one) or waiting for one to pop on the used market—and then paying out the Rubicon for one—if you lack a reservation. Oh, and Ford stopped taking reservations altogether because it’s so behind on deliveries so far, meaning you can’t even jump in line at the moment.

This isn’t the first Bronco First Edition to be flipped on the auction stage for a huge markup. A few months ago, someone listed another First Edition Bronco on eBay for $150,000. Like that eBay Bronco, this Mecum Bronco is a four-door equipped with the higher-output twin-turbo 2.7-liter V-6 “EcoBoost” engine, although this example is yellow instead of Area 51 gray. Nor do we suspect this will be the last Bronco auctioned for big money. As long as there is demand for the 4×4 and very little supply, economic principles will hold.