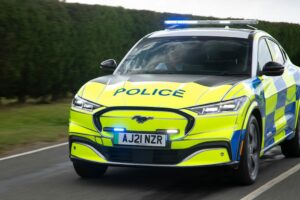 Ford has built a new Mustang Mach-E electric police car concept which could soon find its way into service on the UK’s police fleets.

It’s still a prototype for the time being, but several British police services (including Police Scotland and the Metropolitan Police Force) have already shown an interest in the car.

To turn the road-going Mustang Mach-E into a crime-fighting cruiser, Ford called on the help of its long-standing blue-light vehicle conversion partner, Safeguard SVP.

The company outfitted the EV with LED strobe lights, sirens, radios and a modern take on the classic battenburg chequered livery, which uses more reflective vinyl to improve the car’s visibility to other road users.

There’s even an extra 12-volt battery pack to run all of the police-specific accessories so they don’t sap power from the Mach-E’s main propulsion battery and reduce the car’s maximum range.

This demonstrator is based on the Mustang Mach-E Standard Range AWD model, which has a 68kWh battery pack, a maximum range of 248 miles and a combined output of 265bhp from its two electric motors.

However, Ford is also planning to offer its new police car with the same range of powertrains found in its consumer models; there’ll be an Extended Range rear-wheel drive variant with a larger 88kWh battery pack and a 290bhp motor mounted on the rear axle, which Ford says will deliver a maximum claimed range of 379 miles.

There’ll also be a performance option fitted with the same powertrain found in the Mustang Mach-E GT. It’ll have the same 88kWh battery as the Extended Range RWD variant, along with a 480bhp twin-motor powertrain that will accelerate the car from 0-62mph in 3.7 seconds.