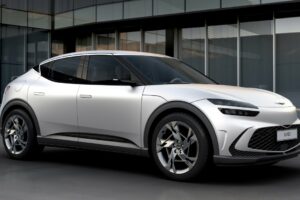 Korean premium brand Genesis outlines the tech and specs for its first purpose-built EV, the GV60, due in 2022

Genesis has confirmed specifications for its new GV60 electric car, which will rival premium EVs such as the Audi Q4 e-tron, the Tesla Model Y and even the Jaguar I-Pace when it goes on sale in the UK in 2022.

Likely to hit Genesis showrooms later next year, the GV60 is based on parent company Hyundai-Kia’s E-GMP electric car platform and is powered by a 77.4kWh battery pack for a maximum range of 280 miles for the ‘RWD’ rear-wheel drive model on the Korean test cycle.

This car features a single motor mounted on the GV60’s rear axle, serving up 225bhp and 350Nm of torque. The GV60 AWD boasts a 215bhp rear motor with a 99bhp motor supporting it on the front axle to deliver four-wheel drive. Total combined output for this powertrain stands at 314bhp and 605Nm of torque, with the extra performance cutting the claimed driving range to 248 miles – although a Disconnector Actuator System will disengage the front motor when it senses this is not needed to maximise efficiency.

As per sister brand Kia with its EV6 GT – and the forthcoming Hyundai Ioniq 5 N – Genesis has confirmed it will offer a GV60 variant with even higher performance, a total output of 429bhp and the same 605Nm of torque as the AWD car. Thanks to four-wheel drive traction this GV60 will sprint from 0-62mph in a best time of 4.0 seconds, while claimed range drops to 228 miles on the Korean test cycle. European WLTP figures will be confirmed later.

The GV60 will also come with two features for the powertrain that are as-yet unseen on the Hyundai and Kia models that share the same E-GMP platform. The first is called Boost Mode and is activated by a button on the steering wheel. This gives the car an extra 54bhp and 95Nm of torque for up to 10 seconds to improve overtaking performance. The second is called Drift Mode, which optimises the power distribution towards the rear axle and makes most use of the electronic limited-slip differential.

Active noise cancelling helps improve refinement, along with a system called Road Preview. This uses data from a camera feed and the navigation to adjust the suspension settings on the fly for extra comfort.

With its 800v electronic architecture allowing for a maximum rapid-charge capability of 350kW, the GV60 can replenish its battery from 10 to 80 per cent in just 18 minutes, while the car’s maximum AC charging performance (for home charging, for example) has been increased from 7.2kW to 11kW, according to the brand.

As per other E-GMP products, the GV60 also supports V2L Vehicle-to-Load functionality, which means users can charge other electronic devices at a faster rate or run equipment such as an outdoor projector.

There’s plenty of other clever tech packed into the GV60, as Genesis has added a feature called Face Connect. This facial recognition technology allows users to unlock the car by looking at a sensor, similar to facial ID tech used on some smartphones. The infra-red camera picks up the user’s face and automatically loads their pre-saved seat and mirror positions, infotainment and head-up display preferences.

Further to this, Genesis’s Fingerprint Authentication System and the first application of the brand’s Digital Key 2 smartphone tech means drivers can enter and start their cars by simply touching the door handle.

Inside, the infotainment matches this high level of technology, with a head-up display, a digital instrument cluster and a central touch panel powered by software that’s capable of receiving over-the-air updates. For the GV60 the OTA update capability goes beyond just the infotainment, however. The car can receive upgrades wirelessly for systems such as the electric vehicle integrated control device, suspension, brakes, steering wheel, airbags, and the Advanced Driver Assistance Systems.

This coupe-SUV features the same split-level headlamps as the Genesis G70 Shooting Brake, although the brand’s trademark radiator grille has been blanked off for improved aerodynamic performance. It’s also mounted further down on the front apron than on Genesis’s other combustion-engined cars.

In the interest of aerodynamic efficiency, Genesis has fitted pop-out door handles that deploy electronically and replace its conventional door mirrors with rear-view cameras, connected to screens in the cabin. The new EV also marks the first instance of a “clamshell hood” on a Genesis model, with the panel cutting into the top of the front wings.

Inside, Genesis has abided by its design ethos of “Beauty of White Space.” The cabin has been made to feel as airy as possible, and the buttons on the dashboard have been kept to a minimum to give a clean look.

The instrument cluster and infotainment system is much like that of the GV80 SUV’s, but the centre console has adopted a new “floating” design. Thanks to the E-GMP platform, the GV60 also has a completely flat floor, which Genesis says provides more passenger space inside.

A design feature bespoke to the GV60, the Crystal Sphere, is also mounted in this floating centre console. When the car is off it acts as a piece of design, flipping over to reveal the gear selector as an indicator as to when the car’s ignition is powered up.

The GV60 will be the company’s second electric model on sale in Europe, closely following the G80 Electrified into showrooms. The car will be Genesis' smallest offering in the UK market, following the G70 Shooting Brake, G70, G80 saloon, GV70 and GV80 SUV.

Full UK prices, specifications and on-sale date will be confirmed closer to the car’s launch, but expect to see the GV60 in Genesis’s luxury retail spaces towards the end of 2022.

What does the new Genesis GV60 have to beat? Check out our list of the best electric cars on sale now…