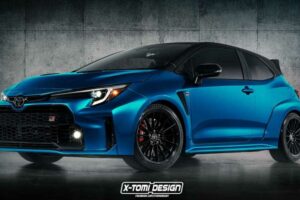 Toyota recently unveiled the brand-new rally-bred GR Corolla hatchback, which will be sold exclusively in America. This exciting hot hatchback borrows many critical components from the GR Yaris, which is sold in the rest of the world. The GR Corolla may have a similar powertrain to the GR Yaris, but it sadly missed out on the Yaris’s sporty three-door layout. For customers who dream of a three-door GR Corolla, the best we can do at this time is this sweet rendering by X-Tomi Design.

The new GR Corolla is the latest hot hatch from Toyota’s GR performance division, and this time it’s headed for the US market. Before the GR Corolla broke cover, the rally homologation special GR Yaris captivated global customers who regularly hit the track with their Toyota hatchbacks. Now it’s America’s turn to enjoy Toyota’s recent passion for building some of the most capable hot hatchbacks on the road.

The new GR Corolla hits American shores with a turbocharged 300 horsepower (223 Kilowatts) 1.6-liter inline-3 that is mated exclusively to a 6-speed manual transmission. The powerful G16E-GTS engine produces 100 horsepower (75 Kilowatts) per cylinder and utilizes clever engineering like oil cooling jets, larger exhaust valves, and a machined cylinder head to reliability produce this power. This driver-focused drivetrain is paired with Toyota’s GR-Four performance all-wheel-drive system that can split the torque distribution based on the driving mode.

The GR Corolla comes in two trim levels with the standard model dubbed Core or the performance-oriented Circuit trim. The latter of which adds a carbon-fiber roof, front, and rear torsion limited-slip differentials, and a more aggressive front hood.

No matter what trim GR Corolla you chose, it’s sure to be one of the best driving hatchbacks on the road. Three doors or five we’re just excited to see Toyota building these exciting hot hatchbacks.