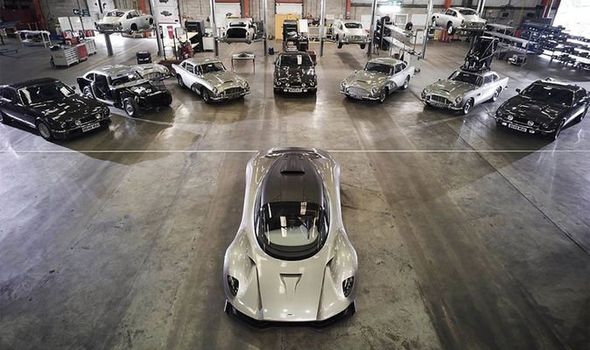 The legendary James Bond franchise will return in 2020 with the 25th instalment of the franchise. Bond 25 is currently being filmed across the world with the crew spotted din Jamaica, Norway and London among other locations. In the James Bond film the card are almost their own characters, with the gadgets they are packed with and usually stunning good looks. While out in Jamaica Bond will, however, be used a beat-up old Land Rover Defender.

Last month it was revealed by the film franchise the three Aston Martin vehicles which would be used in the film – which are much more typical for 007.

The three vehicles are the new Valhalla, iconic DB5 and retuning V8 Vantage.

There was up until this point no word on what role the cars would play in the film.

Typically a Bond flick features a car chase and it looks like the car involved in that will be the DB5.

In an image shared by the official Instagram, it shows one Valhalla, there Vantages but eight DB5s.

Usually, in stunt or chase scenes there are multiple versions of a car required as they can get beaten up or require a different rig fitted on them for a particular scene.

The workshop shows various DB5 in state of repair or with modifications such as some of the cars having special rigs fitted to them.

#007 star Daniel Craig, director @cary_fukunaga, and the #Bond25 crew were out in the sunshine today shooting across a number of London locations, including Whitehall, where Daniel filmed a scene with a classic @astonmartinlagonda V8, first seen in a Bond film in THE LIVING DAYLIGHTS.

The Vantage could also be used in stunt scenes as there three variants in the ‘workshop’ image.

There has been no official word on how each car will be used but there have been some clips shared of certain vehicles being used for example the Vantage was spotted in London and in Norway.

The Valhalla is mid-engined hypercar which is powered by a twin-turbo V6 engine and will sit below the Valkyrie, which is a track-focused sports car.