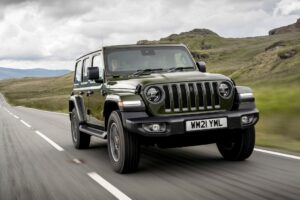 Jeep updates the Wrangler for 2021, with new off-road tech and special-edition model

The Wrangler is known for its blend of retro-inspired design and imperious off-road ability, and the new update aims to build on the model’s off-road prowess while improving safety and efficiency in normal use.

For 2021, Jeep has streamlined the Wrangler line-up, with a familiar 2.0-litre turbocharged petrol engine now the sole powertrain on offer. As in the previous car, it produces 268bhp, sending drive through an eight-speed automatic gearbox – the manual option is no longer available.

The engine is now more efficient too, emitting as little as 242g/km of CO2 – a reduction of 10g/km over the previous car. The specialised off-road Wrangler Rubicon is the least efficient of the line-up, emitting up to 271g/km, due to its increased weight and off-road tyres.

Jeep hasn’t detailed any mechanical tweaks to improve the 4x4s road manners. Instead, special attention has been given to the Wrangler’s all-terrain systems, with a range of new features designed to boost off-road ability.

Selec-Speed control, which works like cruise control and allows steady rock crawling, has been fitted, along with a new tyre fill alert. This allows the driver to lower the tyre pressures to improve traction using the 8.4-inch infotainment screen.

In Rubicon spec, the Wrangler gets a new Off-Road+ mode that brings unique powertrain and chassis calibrations tailored for off-road driving. The system is tuned for high-range ‘sand’ driving and low-range rock crawling, and alters the ABS, stability control, traction control, throttle response and gearbox mapping.

The new Wrangler is available in a variety of new paint colours, including Hydro Blue, Snazzberry and Sarge Green. The Rubicon can be painted in a limited-run Nacho orange hue as well.

Full LED headlights are also fitted, along with a body-coloured hard top and 80th Anniversary badging on the front wheel arches. A unique plaque on the rear tailgate also marks out the special edition model.

Inside, the seats are finished in black leather and boast tungsten stitching, with 80th Anniversary badging too. The dashboard is also trimmed in leather with contrast stitching, and durable Berber carpet mats have been fitted.

The 80th Anniversary edition is also laden with Jeep’s latest interior tech, such as an 8.4-inch infotainment touch screen with navigation, Apple CarPlay and Android Auto, along with a nine-speaker Alpine stereo.

A raft of safety features, such as blind-spot monitoring, a rear parking camera, front and rear parking sensors and forward collision warning are also included.

The new Wrangler is available to order now, with prices starting from £49,950 for the two-door model, rising to £54,450 for the 80th Anniversary in four-door form.

Check out the best 4x4s and SUVs you can buy now…