New Lucid Air is the world’s most powerful electric saloon The Lucid Air’s twin-motor electric powertrain has a maximum output of 1,080bhp and a claimed range of 517 miles 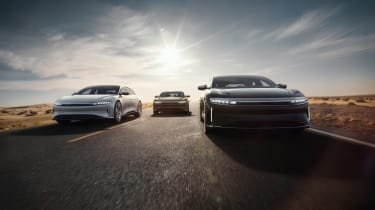 This is the Lucid Air. It’s the first vehicle from the fledgling Silicon Valley-based pure-electric car company, Lucid Motors – and the whole project is a confluence of outrageous statistics and high-stakes claims.

When it reaches the US market next year, the luxury all-electric saloon will provide fresh competition for the Tesla Model S and Porsche Taycan – although Lucid Motors promises that the Air will blow its rivals out of the water, in terms of both performance and efficiency.

The Lucid Air’s powertrain features an electric motor on each axle, which the company says produces a maximum combined output of 1,080bhp. That’s enough, says Lucid Motors, for a 0–62mph time of 2.5 seconds, a top speed of 168mph and a quarter mile time of 9.9 seconds – which is faster than the McLaren P1. Lesser versions will also be available, with either 620bhp or 800bhp.

The company says that the flagship model will be powered by an in-house developed 113kWh battery pack, which provides a maximum range of 517 miles on the American EPA test regime.

This heady range figure is helped out by the Air’s aerodynamics, which Lucid Motors says are better than any other luxury vehicle on sale today. The saloon has a drag coefficient of just 0.21, which makes it more slippery than the Tesla Model 3, Tesla Model S, Porsche Taycan and even the efficiency-focussed Toyota Prius.

To top things off, the American firm claims that its new luxury saloon will be the world’s fastest charging electric vehicle, with the capability to recover up to 20 miles per minute when plugged into a DC fast-charger. In the real world, Lucid Motors says this translates to around 300 miles of range for just 20 minutes of charging.

The cabin is dominated by an enormous 34-inch curved 5K screen, which “floats” above the dashboard and features controls for everything from the car’s exterior lighting to its navigation and media functions. 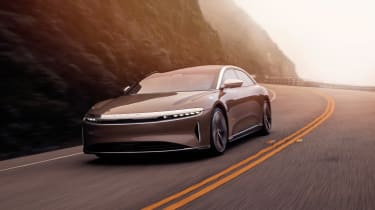 In the centre console, there’s an extra display for the car’s cabin and drivetrain functions which, at the touch of a button can be retracted into the dashboard to reveal a hidden storage bin. To offset the digital displays, there’s a few solid metal rotary dials, such as a volume roller for the steering wheel and alloy toggle switches for the car’s climate controls.

The Lucid Air line-up is split into four models. There’s a base-model, Air Touring, Grand Touring and a highly specced Dream Edition variant – although specifications for the entry-level option are yet to be confirmed.

The current cheapest Air Touring model is priced from $95,000 (around £72,950) – and it comes as standard with the firm’s 620bhp electric powertrain, a set of aerodynamically-efficient 20-inch alloy wheels, a choice of metallic paint finishes and a range of leather upholstery colours.

Lucid Motors’ upper mid-range Grand Touring model is priced from $139,000 (around £106,000) and features the company’s 800bhp powertrain, along with 21-inch alloy wheels, a panoramic glass roof, an 800W premium stereo system and future-ready hardware to support Level 3 autonomous driving capability, which should allow the vehicle to assume total control of its functions on motorways without the driver’s supervision.

Buyers can also choose from a few optional extras, such as all-weather floor mats and a cold weather package which includes heated rear seats and heated windscreen wipers.

END_OF_DOCUMENT_TOKEN_TO_BE_REPLACED

END_OF_DOCUMENT_TOKEN_TO_BE_REPLACED
We and our partners use cookies on this site to improve our service, perform analytics, personalize advertising, measure advertising performance, and remember website preferences.Ok