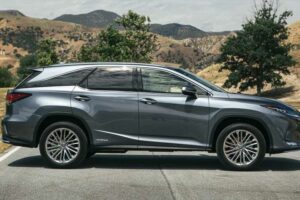 You might think Lexus has an embarrassment of larger SUVs, and you’d be right—next to the midsize RX, the luxury crossover that essentially created the luxury crossover segment, there is the three-row RX L, the more off-road-oriented GX, and the full-size LX. On the small end of the lineup, Lexus also sells the compact NX, the subcompact UX, and is adding the all-electric RZ 450e. SUVs aplenty, no? Yes, but there is a gap in the family, one sized like a Mercedes-Benz GLS-Class, BMW X7, or Audi Q7. And according to Automotive News, Lexus is on top of it.

You see, the GX and LX are indeed larger than the RX and RX L models, but they don’t exactly fit the mold of a family oriented three-row SUV. The GX is effectively derived from the global Toyota Prado, a rugged, body-on-frame SUV in the old-school mold. It offers a third row seat, but it’s not exactly roomy or flexible inside, at least not compared to a car-based crossover, and sits on a stubby wheelbase and is tall, heavy, and powered by a thirsty V-8. The larger LX features similar breeding, being based on the latest Toyota Land Cruiser that is no longer sold here; it, too, is a body-on-frame behemoth geared toward off-roading.

What Lexus needs, therefore, is something as large as the GX and LX, but car-based with more efficient interior packaging and more space in the second and third row seats, as well as behind those seats. It also needs to be lighter, or at least not powered by a V-8 or large twin-turbo V-6, as is the LX, especially given gas price concerns these days.

Enter the Lexus TX, which dealers are apparently clamoring for. Apparently, this TX will be based on an upcoming Toyota Grand Highlander, a bigger version of today’s midsize three-row Highlander set to go into production in Indiana in 2023. Sources tell Automotive News that the TX will offer seating for up to eight passengers and likely pack hybrid powertrains. Critically, the TX (and Grand Highlander) will be larger than the RX L, which is really just an RX with a slightly stretched wheelbase and vestigial third-row perches suitable only for children. Look for more on this all-new Lexus nameplate when it appears later in 2023; it’s expected to follow the Grand Highlander by several months.