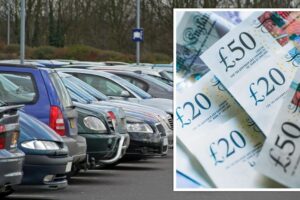 Councillors from the Scottish National Party have pledged to launch a congestion charge in Edinburgh, if they are returned to power in next month’s local elections. This would only apply to drivers from outside of Edinburgh being charged to enter the Scottish capital.

It is hoped this would reduce the number of cars in the city at peak times as well as encourage people to use public transport.

The Scottish Conservatives have also slammed any proposals to introduce a workplace parking levy, which many have described as a car park tax.

The WPL would target any businesses with 50 parking spaces or more and charge them annually to use them.

This cost can be passed down to the employees, with estimates showing it would amount to around £2 per day per space.

Douglas Ross, leader of the Scottish Conservative Party, accused the Scottish National Party and Greens of “continuing to hammer the motorist at every turn”.

He added: “SNP ministers are now agreeing to the demands of their extremist friends in the Greens by rowing back on previous commitments to upgrade crucial trunk roads.

“They are also happy to hit workers with an extra tax for simply driving to work.

“We now know they want to go even further in Edinburgh and hit commuters with a levy for travelling into the capital.

“These attacks on motorists simply cannot continue,” according to The Herald.

More councils are considering introducing workplace parking levies across the UK, with many taking inspiration from the operations in Nottingham.

Nottingham is currently the only city in the UK to have a WPL in place, charging businesses with more than 10 parking spaces £428 every year per space.

This charge increases every year, in line with inflation, with eight out of 10 workers reporting the cost has been passed on to them.