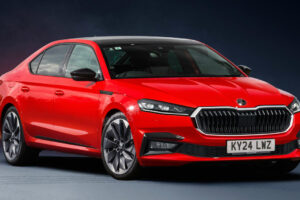 The Skoda Superb is returning with a fourth-generation model in 2023 and our exclusive images preview how it could look. Thanks to additional spy shots of prototype cars, we expect Skoda will introduce a new approach to exterior and interior design for its flagship saloon and estate model.

Underpinning the new Superb will be the tried and tested VW Group modular MQB architecture – albeit the updated MQB Evo version of the platform. It will be shared with the next Volkswagen Passat, with the two models to be built in Bratislava, Slovakia. The Superb will get a slight increase in length and wheelbase to help further distance it from the Octavia, which also grew for its fourth generation.

Our exclusive render highlights the Superb’s evolution of design over the previous model. The latest spy shots back this up, showing a slightly revised octagonal grille in between thinner headlights. Beneath, there’s a new lower grille shape and isolated air takes at the side. The classic Skoda badge indent from the bonnet to the grille remains.

At the side the larger dimensions become more obvious with a long rear overhang. A shoulder-line crease has also appeared and towards the rear we see a fairly simple bumper design, although expect to see a larger form of the C-shaped rear light unit from the new Fabia.

Due to the MQB Evo platform, there will be no pure-electric Superb. Instead, we’ll see VW Group’s final generation of combustion engines, compatible with Euro 7 emissions rules likely to be introduced in 2025. While the popularity of diesel has waned, we expect to see it return on the new Superb with a variety of TDI options – ranging from 148bhp to 197bhp.

Petrol power should be available in mild-hybrid and plug-in hybrid guises with the potential for it to borrow the more powerful Passat GTE’s powertrain. It’s anticipated that the updated MQB platform will accommodate a longer-range plug-in setup, with enough battery power to surpass 62 miles (100km) of electric-only running.

The Superb’s interior will feature a complete overhaul with a new approach to how users interact with the controls. This has been a controversial area within the VW Group, thanks to a mixed response for the interface within the latest Golf.

Skoda may avoid some of these problems through better use of its infotainment screens. We previously spoke to former Skoda CEO Thomas Schäfer (now CEO of VW), who said that more fundamental revisions will arrive with the Superb. “The car’s interior is a huge step forward,” he told us. “It will carry our new user language, which extends to what you touch and feel. Superb will get it first, and then [the second-generation] Kodiaq after.

“We’ll see some elements from Enyaq iV, but we think we need to do more of the traditional controls, not only playing with the biggest display in the industry (a hint that the Superb could feature the Enyaq’s 13-inch screen) but also having elements that make sense for our brand. If there’s one brand that should be functional, clear and easy to use, it’s us.” Auto Express understands this could mean multiple functions for single physical dials and switches.

Now click here to read all the latest news on the next Skoda Superb’s sister car, the new Volkswagen Passat…