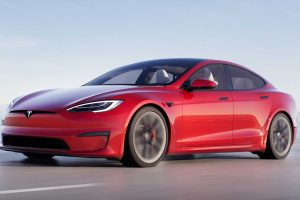 Tesla’s Plaid performance upgrade for the Model S has broken cover, giving the saloon a maximum output of 1,006bhp

Last year, Tesla confirmed it was developing a new, flagship version of the Model S, which was specifically designed to put the Porsche Taycan back in its box. Musk called it “Plaid” – making a flippant reference to the 1987 parody film Spaceballs – and has now put it on sale, with a starting price of £110,980.

The Tesla Model S Plaid is powered by the company’s newly developed three-motor Plaid powertrain, which generates 1,006bhp. The system gives the saloon a 0–60mph time of 1.9 seconds (which is quicker than any road car on sale today) and a top speed of 200mph. The car will also dispatch the quarter mile in less than nine seconds.

It isn’t all face-melting performance, though – the new Model S also features “updated battery architecture,” which gives the range-topping Plaid+ variant (which costs an extra £20,000 over the standard Plaid model) a maximum range of 520 miles.

Specific details about the nature of these updates are yet to be released, although Tesla has said the Plaid system features a new battery module and “updated thermal architecture.” The unit is also compatible with the company’s latest 250kW charging infrastructure.

Tesla also made a few aerodynamic changes to the Model S as part of the Plaid upgrade. Tweaks include a deeper front splitter, wider side skirts, an enormous rear diffuser and a ducktail spoiler – all of which will supposedly keep the car on the ground. There’s a few chassis improvements, too, such as larger brakes, lower suspension and new dampers.

Before the car’s official launch, Tesla whet our appetite by lapping a Model S Plaid mule at Laguna Seca. The car set a time of 1:30.30 minutes – and the company aimed to shave a further three seconds off that. Elon Musk also said his ultimate goal was to make the Model S “achieve the best track time of any production vehicle ever.”

Tesla’s new-found interest in the famed circuit was put down as a reaction to the Porsche Taycan’s record breaking lap, where it unofficially claimed the title of the “world’s fastest four-door, pure-electric sports car.” However, Porsche’s run is surrounded in controversy as it wasn’t timed using official equipment.

Tesla is also gearing up for a shot at the Nurburgring record. Last year, the firm issued a telemetry map, which propped up the claim that its Model S Plaid development mule had lapped the Green Hell in around seven minutes and 20 seconds. An official lap time has yet to be released, but this preliminary time would make the Tesla more than 20 seconds faster than the Porsche Taycan.

During the same shareholder meeting in which the Model S Plaid project was originally announced, Tesla released some information on its next-generation batteries. At the time, Elon said the company was working on a more efficient shingle-lattice load-bearing battery pack, which would soon replace Tesla’s traditional cylindrical cells.

Although this jargon sounds bewildering, the outcome of the new technology is a battery pack which occupies the same space as the old unit, but can store far greater reserves of electricity. Tesla also said the cells should be cheaper to make, thanks to the use of a new silicon anode rather than a traditional graphite anode.

What do you make of the new Tesla Model S Plaid? Let us know in the comments section below…