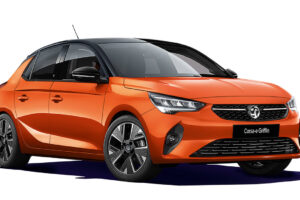 The new all-electric Vauxhall Corsa-e Griffin has been revealed, with a lower price and more standard equipment

The Vauxhall Corsa-e Griffin sits above SE Nav Premium spec when it comes to the level of equipment on offer, yet the new model undercuts it on price in a bid to strengthen the Corsa-e as a value proposition.

While higher-spec versions use a 10-inch infotainment touchscreen, the Corsa-e Griffin features a 7-inch system with Apple CarPlay and Android Auto integration as standard. Satellite-navigation is also included, along with a 7-inch digital instrument display.

The powertrain is unchanged, so thanks to a 50kWh battery pack the Corsa-e has a range of over 200 miles, with a zero to 80 per cent charge taking just 30 minutes thanks to standard 100kW DC rapid charge capability.

Power output stands at 134bhp, and with an identical 260Nm of torque to the rest of the Corsa-e line-up performance is also unchanged, with the 0-62mph sprint taking 8.1 seconds.

With a starting price of £26,390, Griffin spec cars come in at £750 cheaper than SE Nav Premium models, despite the added kit. Vauxhall also offers a PCP scheme with monthly payments starting from £265.