New Volkswagen Aero B spied ahead of 2023 launch 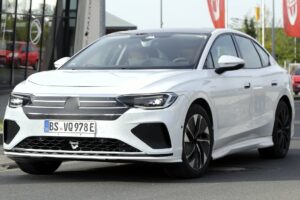 The new Passat-sized, all-electric Volkswagen Aero B will sit on an updated MEB platform and could come with 435 miles of range

The upcoming Volkswagen Aero B has been spied testing once again, giving us our best look yet at the new Tesla Model 3 rival.

It appears the new all-electric saloon will retain a similar design language to VW’s current crop of ID range. At the front the nose is short and low for better aerodynamics and the lower grille and headlight design is reminiscent of the ID.4’s. The grille is still camouflaged and it’s likely to be much smaller than the one on this test vehicle for better a drag coefficient.

There’s a strong crease running along the side of the Aero B, just like the one seen on the new ID.5 SUV. The rear is still disguised but we can expect a similar design to the rest of VW’s all-electric range.

Internally codenamed ‘Aero B’, the model will rival cars such as the Tesla Model 3, Polestar 2 and forthcoming Hyundai Ioniq 6 when it is released to the market in 2023.

The Aero B was first shown as a concept, dubbed the ID. Vizzion, at the 2018 Geneva motor show. We expect the finished car’s name will stick with the traditional ID naming convention. In 2018, Volkswagen bosses promised that the finished car would be capable of 600km (327 miles) on a single charge, but with the updated MEB platform imminent the new Aero B could shatter that estimation.

In a presentation at the UBS Paris Electric Car Day, VW revealed ‘enhancements’ for the MEB platform, which could debut on the Aero B.

The battery and motor system will be capable of delivering 435 miles on a single charge, while the maximum recharge rate of the system will be upped from 150kW to 200kW. Given the larger base of the Aero B, VW should be able to incorporate its biggest batteries without much trouble.

Performance should be increased too with the potential for a hot four-wheel drive GTX-branded version to offer a 0-62mph time of around 5.5 seconds. The current ID.4 GTX SUV puts out 295bhp and 310Nm of torque so the hot Aero B could better that still.

Eventually, Volkswagen will launch an estate version of the Aero B, too, as previewed by the ID. Space Vizzion concept from the 2019 LA Motor Show. The concept was also fitted with a dual-motor electric powertrain, which produces a more potent 335bhp. It remains to be seen whether this powertrain will make it into production, though.

Inside, we expect the Aero B will share the same compact digital dashboard and 10-inch infotainment system as the rest of Volkswagen’s MEB models with the potential for the larger 12-inch screen on top models.