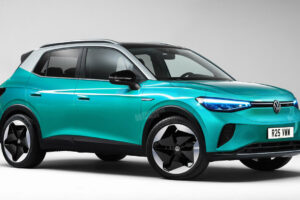 The new Volkswagen ID.2 baby electric SUV will be part of an extended ID. line-up, and our exclusive images preview how it could look

Volkswagen is set to introduce smaller and cheaper all-electric ID. models with a VW ID.2 baby SUV followed by a supermini EV later, and the cars could well be manufactured by SEAT in Spain.

VW has been working on a more affordable version of the all-electric MEB platform that underpins the likes of the ID.3 and Skoda Enyaq for over three years. The project, codenamed MEB Entry, is expected to spawn at least four new models in the middle of the decade for the German and Czech brands, along with SEAT.

Following Volkswagen’s existing naming convention, the two badges at the bottom of the ID. line-up, ID.1 and ID.2, will be used for a supermini and a small SUV respectively. Teasers in recent VW Group presentations suggest that the ID.2 will be the first to arrive, appearing before the end of 2025.

Our exclusive images show how VW’s ID.2 could look. It will try to maximise the benefits of a bespoke all-electric platform by having short overhangs at the front and rear, freeing up a longer wheelbase. The car should be about the same length overall as the T-Cross, and the height of the seating should be similar, but cabin space is likely to be comparable to that of the larger T-Roc.

The ID.2 will incorporate other ID. elements, potentially including the flush front grille area and a black tailgate, while in the cabin, expect VW to harness the power of economies of scale to use features such as the existing ID.3’s digital dashboard and ‘rocker-switch’ drive selector.

It seems likely that the ID.2, and all MEB Entry models, will be offered with a choice of battery sizes to suit different budgets. The cheapest version could have as little as 30kWh of usable capacity, delivering a range of around 120 miles, while higher-end variants will use all of the available space between the axles to offer up to 45kWh. Even with improvements in battery energy density, the focus on cost seems likely to ensure that none of the initial wave of MEB Entry models will offer any more than around 180 miles of real-world range.

The lengthy nature of the budget EV project – it could end up taking almost eight years to get its vehicles to market – shows just how big a challenge it is to deliver sensible range while getting the price below the target figure of 20,000 Euros (£17,000) before any local subsidies or discounts.

The main factor in the price, of course, is battery cell technology. Earlier this year, VW announced plans for a ‘unified cell’ platform that could deliver cost savings of up to 50 per cent. But the company’s head of battery tech, Frank Blome, has conceded that while a standardised battery-housing design will be part of the process, there is scope for vehicles at different prices to use different chemistries within cells of the same size.

The upcoming ID.2 and its stablemates could well use lithium iron-phosphate (LFP) technology. Previously seen as giving poor energy density compared with the more commonly used nickel-cobalt-manganese and nickel-cobalt-aluminium mixes, LFP has gained popularity recently after Tesla began using it more to avoid rising nickel prices. “These cells are cheap and robust,” Blome said. “They can withstand many charging cycles and this makes them very promising for vehicles with short ranges.”

The ID.2 is all but certain to be produced alongside sister vehicles from SEAT and Skoda in a Spanish factory, probably Barcelona. VW confirmed last month that Spain will be the base for the third of the company’s six planned battery cell factories. And while the plant could yet be based near the VW facility in Navarra, which makes the Polo and T-Cross, it’s more likely to be sited close to the huge site in Catalonia that’s currently the home to four SEAT vehicles, as well as Audi’s Q3 and A1.

SEAT President Wayne Griffiths said earlier this year, “We want to make 500,000 urban EVs per year in Martorell, starting in 2025. The urban electric car would be a huge project in terms of potential volume for Spain.”

Indeed, SEAT is likely to be the first of the VW Group brands to launch a car on MEB Entry. Griffiths said that a small pure-electric SEAT SUV “will be the first car for an entry platform for different brands of the Group”. This vehicle, a small SUV, remains the only confirmed pure-electric model in the pipeline for SEAT, because all other EV projects coming out of Barcelona are attached to the more premium Cupra brand.

The ID.2 may still be up to four years away from reaching VW showrooms, but we should get a strong official hint soon on how it will look. Speaking to our German sister title Auto Bild recently, VW boss Ralf Brandstätter suggested that the new model could appear, albeit in concept form, as early as next month’s Munich Motor Show. “Our [Munich] trade fair star could be a vision for an electric car that does not yet exist,” he said. “Around 20,000 Euros, compact, with features that you would not expect in this class.”

Click here for all the latest on the upcoming Volkswagen ID.1 electric supermini…