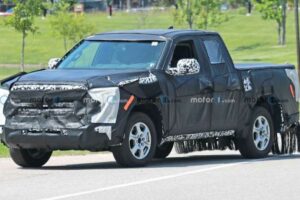 The new unofficial renderings we covered earlier today painted a pretty picture of what the new Toyota Tacoma could look like when it arrives for the 2024 model year. That’s all very important, but the truck will receive more than a new design with the next-generation model. The pickup will also ride on a new platform.

Toyota will build the next-generation Tacoma on its new TNGA-F body-on-frame architecture. The new platform will also underpin the next-gen 4Runner and the new Hilux. Toyota already uses it to underpin the new Tundra, which brings us back to the new Tacoma because the truck isn’t wearing its own body panels.

According to our spy photographers, the Tacoma it caught testing in Ann Arbor, Michigan, is wearing a modified Tundra body. The new photos show the truck wearing a bit less camouflage than we’ve previously seen, revealing the Tacoma to feature the Tundra’s grille, mirrors, and double-cab configuration. The Tacoma will feature a shorter wheelbase than the Tundra, which could be up to a foot shorter.

The new spy shots don’t capture the interior, but there is enough of the dash visible to see Toyota trying to hide it. A spy video from late last month caught a glimpse of the truck’s interior, and it looks like it could receive a larger infotainment screen. It should also borrow cabin styling cues from the Tundra.

Rumors suggest that Toyota will keep the truck’s current powertrain lineup and add a hybrid to the mix. That means the 2.7-liter four-cylinder and the 3.5-liter V6 soldiers on for several more years. We also expect the electric truck concept Toyota revealed late last year to arrive as a production model eventually, likely joining the Tacoma lineup for the 2025 model year.

Our spy photographers believe we’ll see an actual prototype before the end of the year, but it’ll arrive late. That means we’ll likely get a debut of the production vehicle sometime in 2023. Production won’t’ allegedly begin until December 2023, so Toyota has a lot of time to plan the reveal.