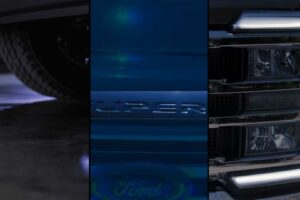 We’ve seen spy photos of next-generation Ford Super Duty prototypes for nearly a year, but the wait is nearly over. Save the date for September 27, because that’s when all the tarps and camo wrap will peel away from Ford’s lineup of beefy trucks.

The news was revealed by Ford on social media. Specifcally, the official account for Ford Trucks shared a short video offering glimpses of the headlights, grille, and tire. With the video is a simple message: The all-new Super Duty truck is coming on September 27.

As of now, we’re aren’t sure if this will be a 2023 or a 2024 model. We are sure that it will borrow heavily from the F-150 for its updated look, and numerous trim levels will be available. We’ve already seen XL spy shots as well as XLT, Lariat, and King Ranch test vehicles. The latest teaser clearly shows a face that closely resembles the F-150, though the headlights are a bit more square. Spy shots have revealed that a variety of lighting arrangements, trim, and grille designs will denote lower-cost trucks from range-topping versions that already get close to $100,000 before adding options.

The exterior makeover will come with a digital upgrade inside. Sources tell us a large center screen up to 12 inches in size should grace the central dash, and a digital instrument cluster will face the driver. Analog gauges could remain available on lower trim levels, but regardless of the spec, there should be plenty of tactile buttons and knobs for controlling basic functions. In this instance, a digital makeover doesn’t mean a minimalist layout.

We expect gasoline and diesel engine options to largely carry over from the current generation, which launched for the 2017 model year. A recent report claims a new 6.8-liter V8 engine could enter the lineup, possibly replacing the 6.2-liter engine. This is supported by a possible leak from the former Canadian Auto Workers Union president back in 2020, who also stated the engine could be used in the next Ford Mustang.

Our questions should be answered soon, and September 27 is just around the corner. We will have all the latest information on the new Ford Super Duty as soon as it’s available. In the meantime, check out the Rambling About Cars podcast for more on Ford and other recent vehicle debuts, available below.