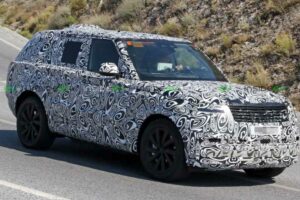 The all-new Range Rover plug-in hybrid is expected to have a lot more electric range than the current model.

Our spies just sent us a batch of photos featuring the next generation Range Rover spotted conducting hot weather testing. The camouflaged prototype was the plug-in hybrid model that will surely improve upon the current P400e model’s 19 miles (30 km) of pure-electric driving range.

We know it’s the PHEV because it has a fuel filler door and one for the charging port and there’s also a sticker on the windscreen that says “Hybrid Electric Vehicle.” The current model has a 2-liter four-cylinder turbocharged engine that together with an electric motor make 398 horsepower and 479 pound-feet of torque.

The new model, which will be built on the new MLA platform, will probably keep the four-cylinder power plant, but it may be more powerful and it will surely have a bigger battery than the 13 kWh pack in the current P400e (the new Land Rover Defender P400e has a 19.8 kWh pack and it could be shared with the new Range).

It is worth noting that MLA does support fully-electric vehicles (the all-electric Jaguar XJ that never reached production had this platform), but the pure EV variant of the Range Rover won’t arrive until 2024.

Another important point to note about the upcoming Range Rover is that it will be moved upmarket, a rival for the cream of today’s SUV crop, with models like the Bentley Bentayga and Rolls Royce Cullinan in its sights. This means it will also have to look more impressive than today’s model, yet with the camouflage on, the prototype looks very similar with a hint of Velar.

Expect to see the all-new Range Rover debut around the end of the year or in 2022, and just like its predecessor, it will come in standard- and long-wheelbase body styles.