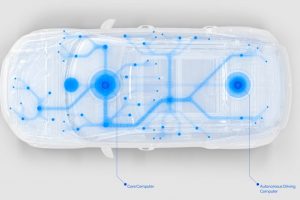 Volvo Cars has announced that it will deepen its collaboration with Nvidia, and will be the first automaker in the world to use the Nvidia Drive Orin system-on-a-chip (SoC). This SoC will be used to power the autonomous driving computer in next-generation Volvo models on the SPA2 platform.

According to the company, Nvidia’s new SoC is capable of an unprecedented 254 tera (trillion) operations per second (TOPS). The Swedish automaker will develop the self-driving software in-house, together with autonomous driving software development subsidiary Zenseact. Development includes backup systems for steering and braking.

The new Highway Pilot self-driving feature can operate unsupervised, but this can only be activated once it is verified to be safe for use in selected markets. All these work in tandem with the Nvidia Drive Xavier chip that is currently in use; Xavier manages core functionalities such as base-software, energy management and driver assistance.

Volvo said using a centralised computing architecture such as Nvidia Drive Orin removes a lot of complexity. Instead of relying on multiple electronic control units around the car that control individual features and systems, much of the software will be developed in-house and kept in a central computer in the car. This enables more frequent improvements and growth in features via over-the-air updates.

Volvo’s chief technology officer, Henrik Green said: “We believe in partnering with the world’s leading technology firms to build the best Volvos possible. With the help of Nvidia Drive Orin technology, we can take safety to the next level on our next generation of cars.”