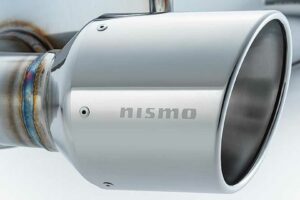 Nissan Motorsports & Customize Co., Ltd. has announced the first customization that you can do on the new Z car. The first official upgrade will be from Nismo and it will come in the form of a sports muffler.

The Nismo sports muffler for the 2023 Nissan Z (dubbed Fairlady Z in Japan) is made from stainless steel. It’s a center pipe and rear muffler set, with the exhaust finishers adorned with the Nismo logo and sporty rivets. According to Nismo, the set plays “a light and comfortable exhaust note from normal driving to high-speed driving.”

As an official upgrade, the Nismo sports muffler comes with a replacement muffler pre-certification system. It will, however, lower the minimum ground clearance by 5mm with a set of mounting accessories.

The Nismo sports muffler is compatible with all 2023 Nissan Z cars, priced at 308,000 yen (with tax) or around $2,410 at the current exchange rates. Ordering and shipments will commence in fall 2022, which will be around September.

The US will likely get the said sports muffler upgrade, although customers should know that production and consequently, the launch of the car has been delayed due to the ongoing parts shortage. It was announced in conjunction with the automaker’s press release for pricing in Japan, and confirmed to Motor1.com by a Nissan spokesperson.

That said, expect the 2023 Nissan Z on US shores sometime in summer this year, which should be around June. The official US pricing hasn’t been disclosed as of this writing, though it’s believed that it will start around the $40,000 mark.

As for the breakdown of the trim levels and what to expect, a leaked order guide from early this year should give you a good look.