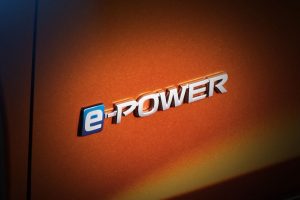 The 50% thermal efficiency figure was achieved through a concept Nissan calls Starc, an acronym from the words strong, tumble and ‘appropriately stretched robust ignition channel’. A strengthened in-cylinder gas flow – the flow of the air and fuel mixture into the cylinder – enables the combustion of a more diluted air-fuel mixture at a high compression ratio, says Nissan. The steady-rate operation of the internal combustion engine is typical of range extender hybrid setups, as employed in the Nissan Note e-Power which uses an earlier iteration of the powertrain bearing this name. In the car that made its debut in 2016, this featured a 79 PS/103 Nm 1.2 litre HR12DE three-cylinder engine that isn’t mechanically part of the driveline, but rather serves as a source for the 109 PS/254 Nm electric motor.

Electrification is pursued at Nissan firstly via the development of fully electric powertrains and high-performance batteries, with the second pillar of development represented here by e-Power systems, said senior vice president of powertrains and EV engineering Toshihiro Hirai. “In pursuit of carbon neutrality across our product lifecycle by 2050, Nissan aims to electrify all new models launched in major markets by the early 2030s,” Hirai added.

“It took 50 years to increase thermal efficiency of conventional engines from 30% to 40%, but with e-Power, we can increase it to 50% in several years. That has been the target for the engineering community,” Hirai said, according to Reuters.