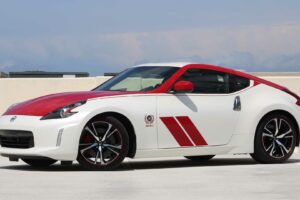 Thankfully, a new Z sports car is coming next month.

Nissan has just reported its second-quarter sales for 2021 and while there are no huge surprises, we are sad to see the brand’s two sports cars continue to perform very poorly. When we last reported on the 370Z and GT-R sales in April this year, the Z sports car had just 28 units delivered while the larger and more expensive of the duo saw 50 deliveries. Now, three months later, things are looking even worse.

While the GT-R remained relatively stable with 49 sales from April to June, just 1 example below Q1, the 370Z saw another major drop in demand. Only 5 examples of the Z coupe were delivered to customers, which represents a 95-percent decrease from the same period last year. Yikes!

As far as the 370Z is concerned, the numbers shouldn’t come as a surprise. Nissan will finally unveil the sports car’s replacement, simply known as the Z so far, on August 17. We expect the new two-door from Japan to go on sale before the year’s end and to vastly improve the sales numbers of its predecessor.

Outside the sports cars segment, Nissan seems to be doing good, especially compared to Q2 of 2020. The company’s total sales in the United States from April 21 to June 21 this year were 280,282 or up 73.8 percent compared to the same period last year. For the first six months of the year, the automaker is up by 39 percent.

The best-performing Nissan in terms of sales was the overhauled Rogue with 95,569 deliveries during the second quarter of the year. In the non-SUV segment, the Sentra won first place with 40,621 deliveries, roughly double the sales it registered in Q2 last year.