Home » Car Reviews » Nissan sold one million crossovers in the UK – Juke, Qashqai the most popular with 93% combined share – paultan.org

Nissan sold one million crossovers in the UK – Juke, Qashqai the most popular with 93% combined share – paultan.org 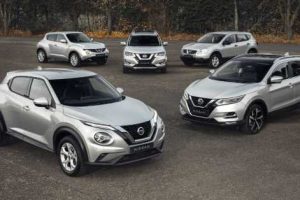 Nissan has become the first automaker to sell one million units of crossovers in the UK. To celebrate the occasion, it wrapped five of its best-selling models in platinum, much like how musicians are awarded the platinum record for hitting one million album sales.

The crossovers are the first- and second-generation Qashqai and Juke, as well as the X-Trail. The Qashqai is by far the most popular model, with a combined sales of 620,007. Approximately 246,993 units of the first-gen Qashqai were sold between 2007 to 2014, and the subsequent version saw 373,014 units shipped.

The Juke is also a highly popular model. The first-gen was on sale from 2010 to 2019 and sold 292,723 units, and to date its successor has found 20,208 new homes. Both the Qashqai and Juke were designed, engineered and produced in the UK. Three million units of the Qashqai had been manufactured at Nissan’s Sunderland plant, which is the largest automotive plant in the Kingdom.

Of the one million crossovers sold in the UK, 93% of them are made there. The remaining 7% (67,062) goes to the X-Trail, which is fully imported from Kyushu, Japan. Nissan Motor Great Britain managing director, Andrew Humberstone said: “We are thrilled to have reached this unprecedented sales milestone and wish to express sincere gratitude to our customers for putting their trust and loyalty in the quality of Nissan’s vehicles.”

The third-generation Qashqai will also be manufactured at the same plant, and it is expected to be launched shortly after its debut on February 18. Reports suggest that it will retain the same 1.33 litre turbocharged four-cylinder engine shared with the W177 Mercedes-Benz A-Class, but with the addition of a 12-volt mild hybrid system. Two outputs will be available – 140 PS/240 Nm and 160 PS/260 Nm (270 Nm with a CVT and all-wheel drive).

There will also be an e-Power range-extended electric model with a 190 PS/330 Nm motor, juiced solely by a 157 PS 1.5 litre variable-compression mill that functions as a generator. Both power sources are significantly more powerful than the 129 PS motor and 79 PS 1.2 litre three-pot found in the Note and Kicks e-Power and should find their way to Nissan’s other larger models in the near future.