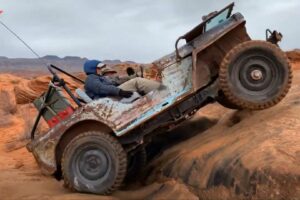 Off-road vehicles today wrap passengers in modern interiors packed with tech and comfort. Consumers no longer have to choose between having a plethora of amenities or rugged capability, with automakers blending the two with models like the Ford Bronco and Jeep Wrangler. Today’s off-road superstars are far from the segment’s humble beginnings in post-war America.

The Jeep that hauled Allied troops around the world would become the basis for an entirely new segment of vehicles. The first civilian Jeep, the CJ-2A, began production in 1945, the same year World War 2 ended, with Willys-Overland advertising the utilitarian off-roader to farmers and construction workers.

More than 70 years later, examples of these early Jeeps, for both civilians and the military, continue to tackle off-road trails. A new video from Stan Fuller on YouTube captures a trio of them tackling Sand Hollow State Park’s Double Sammy trail during the Winter 4×4 Jamboree 2023 in Utah.

The Jeeps might be old and dinged up, but they have no trouble tackling the trail’s various obstacles, crawling up steep rock faces and clawing through deep, soft sand with ease. The vehicles creak and clank as they tackle the trail, but they never complain, completing the course with only one minor hiccup.

At one point during the adventure, the 1948 CJ-2A dropped a tire off a rock step, flopping the Jeep onto its side and into some soft sand. While the Jeep lacks a cage and only features lap belts, no one was injured, and the off-roader escaped without any damage. Now imagine tipping over a nice, shiny new Bronco.

The Jeep didn’t stay stuck for long, with a winch pulling it upright. The exhaust spewed white smoke for a bit as the driver secured the vehicle, with the Jeep back on the trail in about 10 minutes, according to the video. It’s a testament to their durability and ruggedness, taking a beating without stopping. The vintage Jeeps lack heated seats, power-folding mirrors, and basic safety equipment, but that doesn’t hinder their seemingly endless off-road capability.