Home » Car Reviews » Petrol station owner fury at having to charge a staggering £2.20 per litre – ‘unethical’

Petrol station owner fury at having to charge a staggering £2.20 per litre – ‘unethical’ 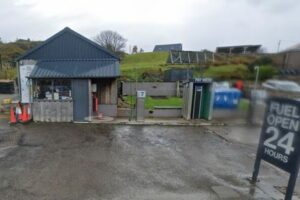 Mr Mackay who runs a filling station in Scotland insists he is livid at the current cost of fuel and blames suppliers who he claims are being unethical and charging stations like his over the odds for petrol and diesel.

Mr MacKay, who runs Richard Mackay & Son Petrol Station in Durness in the Highlands, feels he is being “held to ransom” over the current cost of diesel.

He said: “There’s no problem with supply, it’s the price. We’ve been held to ransom from fuel companies in my opinion.

“They won’t give you a price when you order. You don’t order a new car and when it’s delivered you have no idea what the price is. It’s unethical.

“If you order fuel, you want to know how much it is. Someone’s profiting from all this.”

Mr MacKay pointed out his fuel station sits in a remote location of north-west Scotland, with prices in nearby Inverness “much cheaper”.

He explained: “Our price is 2.20 a litre, with a discount through the rural fuel rebate.

“We supply the emergency services, such as the fire brigade. If the price stays high people just won’t travel.

“My colleagues are all saying the same thing. It’s difficult when you’ve got Tesco as competition. In rural communities there’s 10p a difference – even in normal times,” he told the Scottish Sun.

Locals in the area have taken to social media to complain about the situation, with one writing: “This is important. What happens to the community once transportation stops?”

Another added: “More people have been walking to the shops instead of taking their cars now.”

And a third weighed in with: “Time to break out the ol’ horse and cart.”

Drivers across the UK are facing continued misery as petrol stations are only passing on just over half of the Chancellor Rishi Sunak’s 5p fuel duty cut announced last week.

According to the AA, petrol prices have fallen just 2.71p, and diesel was down 1.59p, despite Rishi Sunak promising on Wednesday a 5p fuel cut would come into force immediately after the statement.

The AA’s research found the average petrol price across the UK was 164.59p a litre while diesel was 178.72p a litre in the days after the Government’s reduction came into effect.

That shows only a slight decrease from Tuesday, when petrol and diesel pump prices jumped to new records of 167.30p and 179.72p a litre.

Mr Sunak had proudly boasted that the 5p fuel cut was historic and that once VAT was added it would mean a 6p cut in the price of petrol and diesel.

He told MPs last week: “Today, I can announce that for only the second time in 20 years, fuel duty will be cut.

Luke Bosdet, the AA’s fuel price spokesman, said: “The Chancellor rode to the rescue of drivers on Wednesday and, even before the 6pm start of the fuel duty cut, drivers were reporting the price cut at some Asda forecourts.

“However, on Thursday, the average price of petrol showed that less than half (2.71p) of the fuel duty cut had been passed on to drivers.”