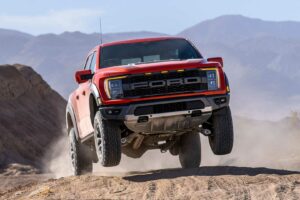 It seems Ford was the target of another high-profile vehicle heist. This time around, thieves made off with no less than 13 F-150 Raptor pickup trucks, with a total value of $1 million dollars. And they were literally nabbed from Ford’s backyard.

Specifically, the pickup trucks were stolen from Ford’s Dearborn Truck Plant, where the F-150 is built. According to The Detroit News, police began receiving reports of stolen trucks on June 17, with additional reports following over the weekend. It’s not clear exactly how the trucks were stolen, but the report mentions damage on some trucks likely resulting from ramming gates or fences.

Dearborn on Instagram states the trucks were parked in a storage lot for the large assembly plant.

One suspect has been arrested. The trucks were recovered from multiple locations, but there isn’t a happy ending to the story. Aside from the aforementioned damage, the F-150 Raptors were reportedly found in various states of disassembly. Wheels and tires were mentioned as the primary components missing. It’s unknown if any of the trucks are salvageable.

If this all sounds vaguely familiar, there’s a good reason for it. In December 2021, thieves made off with four new Mustang Shelby GT500s that were also stolen from the factory. This time, Ford’s manufacturing plant in Flat Rock south of Detroit was the target. As with the Raptors, at least one Mustang was used to ram a fence. Two of the brazen drivers didn’t get far, as police found a couple of the Shelbys approximately 10 miles north of the plant. The drivers, however, were never caught. And as far as we know, the other two Mustangs were never found.

Amazingly, a second GT500 heist took place at Flat Rock around the same time as the recent Raptor theft. Five cars were nabbed from the factory; police took one driver into custody and recovered two other vehicles. It’s unknown if there’s a connection between the Mustang and Raptor thefts.