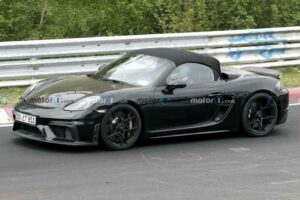 If you like the Porsche 718 Cayman GT4 RS but desire open-air driving ability, then these spy shots suggest an answer is on the way. The German brand is working on a hotter 718 Boxster that would presumably go by the name Spyder RS.

The front end looks the same as the standard 718 Boxster Spyder. The major change is just behind the passenger compartment where there are now a pair of scoops just behind the sides of the roof on the rear deck. They’re presumably for routing additional air to the higher-output engine. The inlets in the lower rear fenders look more prominent than on the Spyder. 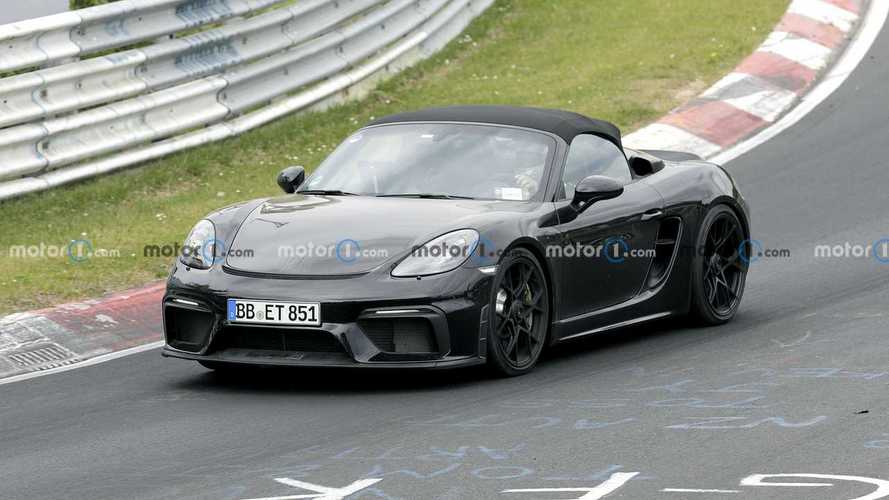 At the back, there’s an active spoiler like on the existing model. The rear diffuser and dual exhausts also appear to be straight from the standard Spyder.

This Boxster rides on center-locking black wheels with X-shaped spokes. There are drilled brake discs. The calipers in front are gold, and the stoppers in the back are black.

Andreas Preuninger is in charge of Porsche’s GT cars like the GT3 and GT4, which includes the Boxster Spyder. He recently said that if a Spyder RS happened it wouldn’t be a track-focused machine.

Preuninger’s statement matches with what we’re seeing here. Other than the styling tweaks for increased airflow, Porsche doesn’t seem to be changing much to turn the Spyder into an RS.

Porsche 718 Cayman GT4 RS and 718 Boxster Spyder RS are among the final hurrahs for combustion power from these models. The next-gen examples arrive in 2025 with fully electric powertrains. Technical details aren’t available yet, but the styling reportedly has cues from the angular Mission R concept.