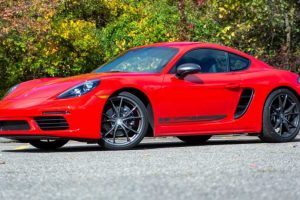 Would you buy an electric Porsche sportscar?

There’s a new Porsche 718 on the horizon but nobody knows how it will be powered. In a recent interview with Top Gear, Porsche CEO Oliver Blume shared that a new 718 is coming, but it will take a couple of years to hit dealer lots because they haven’t even decided how it will be powered. Based on his statements, powertrains can range from an all-electric setup or a more efficient internal combustion engine.

The Porsche 718 occupies an interesting part of the Porsche line-up where it’s meant to be more affordable than a 911 and although its mid-engine layout is superior, it cannot outperform the 911. Working within the 911’s shadow isn’t exactly fair and Porsche knows this, which is why every year the performance of the 718 edges closer to its rear-engine big brother.

So, what will determine the propulsion future for the 718 successors? Blume explained to Top Gear, “EV or ICE depends on whether the battery will be good enough to make a proper sports car. So far, it’s not.” With the rapidly evolving world of battery tech that’s not to say that things will change in a few years, but based on the current situation we can expect the next generation 718 to retain its internal combustion engine.

When the current generation Porsche 718 debuted, it shook up the Porsche world thanks to the introduction of its downsized turbocharged boxer engine which replaced the familiar flat-6. Although the new engine had better performance and emissions on paper, it lacked the emotion and engagement of the old flat-6 which caused Porsche to offer a special edition 718 that has a 4.0-liter flat-6.

After learning this tough lesson, I am sure Porsche would not change to an EV drivetrain simply because it’s better on paper. Now that customers have made it clear that driving pleasure and emotion are important parts of a Porsche purchase, the EV version of the 718 must also be better to drive.