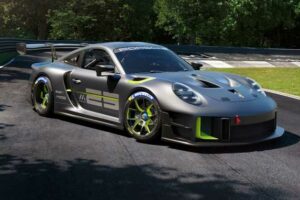 What’s more important in a six-figure track toy: rad looks or rarity? If your answer is “yes,” then the Porsche 911 GT2 RS Clubsport 25 ought to pique your interest.

Think of this new track-only Porsche as a sequel to the modern 935 sans the retro bodywork. Whereas Porsche built 77 such 991-generation 911-based 935s, the automaker plans to produce just 30 of these 911 GT2 RS Clubsport 25s, six of which are earmarked for the North American market.

That’s no typo, either, as Porsche really intends to make 30 models of a car with 25 in its name. This is because the 911 GT2 RS Clubsport 25’s digits represent Manthey-Racing GmbH’s 25th anniversary. The quarter-century-old company is known for its racing (as if the business’s name didn’t give this away) efforts using Porsche vehicles.

While it may seem nice and sweet of Porsche to honor a racing outfit’s loyalty by building a special 911 model in its honor, know that the German automaker actually holds a 51 percent stake in Manthey-Racing. Not that this relationship makes the 911 GT2 RS Clubsport 25 any less awesome, it just means this special Porsche’s arrival is as much a gift to the automaker itself as it is to a devoted racing enterprise.

Straight-line motivation, thus, comes courtesy of a twin-turbocharged 3.8-liter flat-six that spits out just shy of 700 hp. Those ponies are then sent to the wheels by way of a seven-speed dual-clutch automated transmission (or PDK in Porsche-speak). Likewise, the 911 GT2 RS Clubsport 25 cribs its various electronic control systems, as well as its steering bits, from the 991-based 935.

The 911 GT2 RS Clubsport 25’s exterior enhancements go beyond its hue, though, as Porsche fits this special 911 with a reworked front fascia that supports a centrally mounted radiator. The result? Better protection in the event of a collision. Additionally, the lack of radiators in the car’s front corners allows the left- and right-side fascia openings of the 911 GT2 RS Clubsport 25 to better cool the front brakes.

Subtler changes abound, too, such as reworked side plates and support brackets for the swan-neck rear spoiler, new rear ventilation opens just beneath the rear window, an updated rear diffuser and exhaust system, and revised headlights with integrated turn signals.

Sure, the 911 GT2 RS Clubsport 25 may lack some of the visual pop of the 935, but it’s also a far rarer machine that still looks the part of its $620,000 price tag (before taxes or shipping, of course). Deliveries begin in January of 2022 for those with the means and luck to snag one of these limited-run track toys.