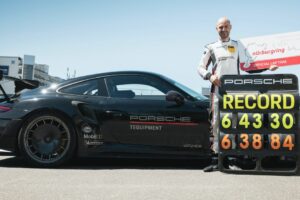 With a time of six minutes 48.047 seconds (6:48.047), the Mercedes-AMG GT Black Series was the fastest series production car to lap the Nürburgring-Nordschleife. We say was because there’s a new king of “The Green Hell,” and it isn’t even an entirely new car.

Porsche development driver Lars Kern was the person behind the wheel, and he managed an average speed of 185.87 km/h during the attempt. It should be noted that the stated time is for the full lap, which includes the the straight section at turn 13 of the Nürburgring. Without considering that portion of the track, the record is six minutes 38.835 seconds (6:38.835), which is still faster than the previous record of six minutes 43.616 seconds (6:43.616).

However, this isn’t just any GT2 RS, as it is fitted with the Manthey Performance Kit that is offered as a Porsche Tequipment option to customers. Working closely with the Manthey Racing, which transitioned from a motorsport team to Porsche’s technical partner and shareholder in March this year, the tuning package’s primary purpose is to make the sports car even more potent on track.

Adjustable coilover suspension also makes its way onto the car, featuring front shock absorbers that can be adjusted to three different settings, while there are four settings for the ones at the rear. Meanwhile, the PCCB ceramic brake system gets racing brake pads for reduced fade as well as improve responsiveness and control precision, joined by steel-encased brake lines for even more direct pedal feedback.

On the exterior, additional flaps on the front spoiler, a carbon underbody and air guide elements in the area of the front wheels help to increase front downforce from 49 to 70 kg at 200 km/h, and from 93 to 200 kg at the rear. The significant aerodynamic improvements at the rear are also a result of a new rear spoiler, a modified diffuser and aerodiscs on the rear wheels. “The 911 GT2 RS sticks to the track like glue with the Manthey Performance Kit – you feel as if you’re in a racing car, especially on faster corners. It is truly breathtaking how the car puts its 700 PS down, and how incredibly well it brakes while always remaining easy to control,” said Kern.

The 3.8 litre twin-turbo flat-six engine doesn’t get a power bump, as it still makes 700 PS (690 hp) and 750 Nm of torque, with drive going to the rear wheels via a seven-speed PDK. However, there’s an additional nine-litre water tank for spray-cooling the intercoolers to help keep intake temperatures low on long runs, allowing the car to maintain peak power for the full lap.

“With these newly developed parts, we have made an extremely good car even better. The 911 GT2 RS with Manthey Performance Kit is perfectly tailored to the needs of those customers who like to take their cars on track, especially the Nürburgring Nordschleife. This 6:43.300 time for the whole lap is equivalent to 6:38.835 for the old shorter variant, so that makes a real statement,” explained Andreas Preuninger, vice president of GT cars at Porsche.