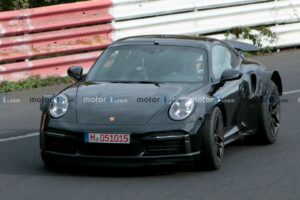 There’s a mystery Porsche on the Nürburgring. This 911 Turbo wears massive fender flares. They’re clearly temporary pieces because you can see the handful of attachment points and hunks of foam underneath the ones in front.

In addition to the big fenders, this Porsche’s ride height appears higher than stock. There are temporary turn signals in the front corners. A sensor is on the roof at the base of the windshield, and a wire runs from this box into the cabin.

This bizarre 911 Turbo wears black, centerlock wheels with six sets of V-shaped spokes. Our spies say they don’t recognize this design from other Porsches.

The first letter of a German vehicle’s license plate indicates the location of its registration. For example, we usually see Porsches with plates that start with S, which indicates Stuttgart, or LB, which is Ludwigsburg where the automaker has several offices. However, the one on this car begins with M, indicating a registration in Munich.

Our spies have one more factor to add to the mystery. An Audi Sport Quattro was nearby this Porsche on the track. It also wore a license plate from Munich. This ’80s-era rally homologation special is a rare sight on the ‘Ring, so there might be some relationship between the two vehicles.

While we don’t know the identity of this vehicle, multiple spy shots and videos tell us that Porsche is working on a high-riding 911 that might go by the name Dakar. The moniker is in reference to the brand competing in the long-distance off-road race. The other rumor is that Porsche calls this model the Safari.

In addition to the taller ride, the 911 Dakar would also have broader fender flares with cladding over them. The development vehicles wear complete covering over the rear bumper, but the large, oval-shaped exhausts are visible.

The Dakar (or Safari) powertrain reportedly uses the Carrera 4S as a starting point. If so, it would have all-wheel drive and make at least 443 horsepower (329 kilowatts) and 390 pound-feet (528 Newton-meters) of torque.