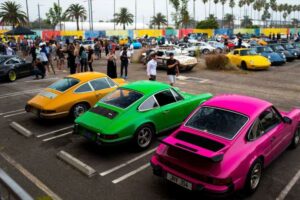 Air-cooled engines helped create Porsche’s sports car reputation thanks to the success of the 356, 911, and Le-Mans winning race cars. The company loves to celebrate this portion of this history. For example, Luftgekühlt 8 in Los Angeles recently brought together owners and fans of these special vehicles. Racers Jeff Zwart and Patrick Long were among the notable folks at the event.

The folks attending Luftgekühlt 8 at the Port of Long Beach brought some very cool Porsches. Some sat underneath the California sun, and others were inside two, 1940s-era warehouses.

As the gallery below shows, there are 911s in every shade of the rainbow and all of the various body configurations. The 356 is also there, including a completely bare body from Porsche Ersatzteile. Rarities like the 550A Spyder, 718 RS, 906, and 910 are there, too. Even the often-unloved 914 makes an appearance.

Porsche said that arranged some of the cars in specific displays, like a group of Carrera RS vehicles. This created “an Instagram-friendly feast for keen photographers,” according to the company.

While Porsches early production models and racers used air-cooled engines, the company began looking at alternatives to this layout in the late 1970s. By then, the brand was offering the V8-powered 928 and VW co-developed 924.

The generation of the 911 with the internal designation 993 turned out to be the final model from the brand with an air-cooled engine. It had a public premiere in 1993 and production ran through the 1998 model year.

There’s no indication of Porsche introducing a new, air-cooled vehicle. In fact, combustion engines don’t even seem to have a long future for the brand. The company is increasingly moving into EVs. It already confirms the next generation of the 718 Boxster and Cayman use electric powertrains. Similarly, the Macan EV and a seven-passenger crossover are on the way. The 911 will eventually go electric but possibly not until the 2030s.