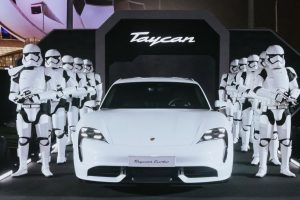 Last year, Porsche delivered a total of 272,162 cars worldwide, which is 3% less than what it managed in 2019. “The corona crisis posed a great challenge from spring 2020 onwards. Nevertheless, we were able to keep deliveries comparatively stable for the year as a whole,” said Detlev von Platen, member of the executive board for sales and marketing at Porsche AG.

“Our fresh, attractive product range, the successful start of the Taycan as the first all-electric Porsche and the charisma of our brand – all this contributed to this positive result despite the difficult times,” he added.

According to Porsche, the Cayenne remained the company’s best-selling model with 92,860 units sold, an increase of 1% compared to 2019. This isn’t much of a surprise, although the same can’t be said of the Taycan.

In its first full year of sales, Porsche’s first series production electric car found its way to 20,015 customers, and this is despite a six-week stop to production just as the new model was ramping up and many markets were planning spring premieres. “We are continuing our product offensive – our customers can look forward to it. It will include additional derivatives of the all-electric Taycan and the 911, among others. We are full of optimism and looking forward to 2021, a year that will also be characterized by unique experiences with the Porsche brand,” said Detlev von Platen in regards to Porsche’s outlook for 2021.

END_OF_DOCUMENT_TOKEN_TO_BE_REPLACED

END_OF_DOCUMENT_TOKEN_TO_BE_REPLACED
We and our partners use cookies on this site to improve our service, perform analytics, personalize advertising, measure advertising performance, and remember website preferences.Ok