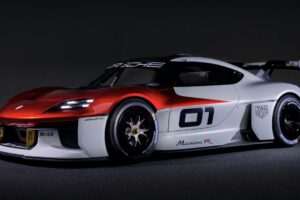 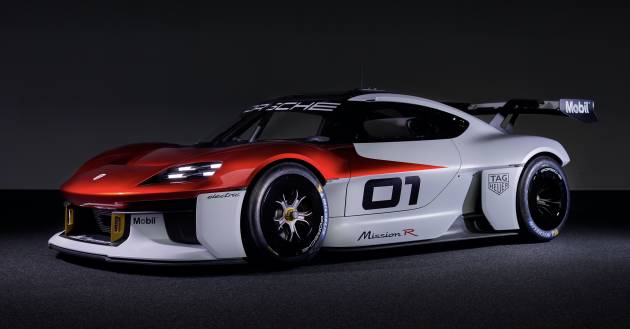 Here’s a glimpse into the future of Porsche GT-class racing. Enter the Porsche Mission R, a dual-motor, fully electric race car concept that produces a peak output of 1,088 PS in qualifying mode, or 680 PS of continuous system power in race mode. Of which, up to 435 PS is sent to the front axle in race mode, says Porsche.

The Mission R will offer a level of performance that is on par with that of the 911 GT3 Cup, says the manufacturer; the electric race car concept weighs around 1,500 kg and does the 0-100 km/h sprint in 2.5 seconds.

This is made possible through the use of a battery that has been designed for sprint racing, and which incorporates high-end cells and direct oil cooling.

The use of 900-volt technology and fast-charging capability enables the Mission R battery to be replenished from 5% to 80% state-of-charge in around 15 minutes at a maximum possible rate of 350 kW, or brief enough be done in between racetrack sessions. Up to 800 kW of recuperation can be generated.

The battery has a total capacity of 82 kWh, and has been designed for a sprint race of between 25 minutes and 40 minutes in duration. Direct oil cooling of the battery is used for its greater thermal advantages, as making use of the entire surface of the battery cells enables larger amounts of heat to be transported to the cooling system.

For the purposes of limiting costs in customer racing, the two motors in the Mission R are identical units in terms of the gearbox, drive motors and pulse-controlled inverters, one located on each axle. Each transmits drive through straight-toothed input gearboxes and mechanical limited-slip differentials. 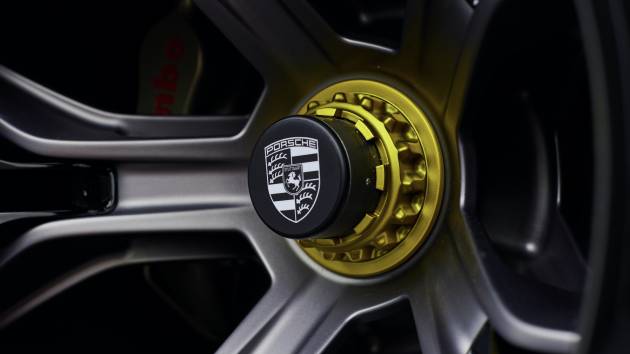 Rolling stock for the Mission R is a set of 18-inch magnesium alloy wheels, flow optimised and milled to save weight. These are mounted with Michelin slick tyres measuring 30/68 in front and 31/71 at the back, and these tyres can be fitted with sensors that network with the car and communicate tyre wear information to the driver. Through this, data such as the next pit stop for tyre changes can be suggested.

Suspension is handled by double wishbones in front and MacPherson struts at the rear axle, with ball-jointed control arms for precise movement. These are attached to steel subframes which then mount to the main chassis.

The Mission R’s brake-by-wire system has a control unit that manages brake blending between the conventional hydraulic disc brakes and regenerative braking. Depending on the race track it is driven on, the Mission R can recover more than 50% of energy for subsequent use. Steering is electrically assisted, while in typical sports car racing fashion, an integrated air jack system lifts the car for quick tyre changes.

The Mission R also gets provision for over-the-air technology, according to Porsche, in order to enable engineers from Porsche Motorsport headquarters to access data from customer cars through a remote interface and facilitate troubleshooting.

High-power electric drive also means high stakes on the safety front, and so Porsche applies the same safety standards to the Mission R concept as it does to its series production vehicles. In the event of a collision, battery connections and high-voltage parts are automatically disconnected to ensure no voltage is present, while LEDs behind the windscreen inform pit crew of the high-voltage system’s status. 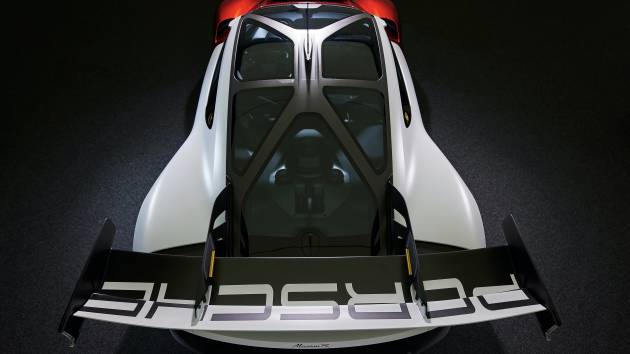 Sustainability is at the heart of electric motorsport, and so sustainable materials are used for the structure of the Mission R. Its carbon-composite cage “exoskeleton” is clothed in parts made of natural fibre reinforced plastic (NFRP), specifically its doors, front and rear wings, sills and side panels as well as rear centre section.

These natural fibres are nearly as light as carbon-fibres, and offer the stiffness required of semi-structural components while weighing less than 10% more than carbon-fibre items. Porsche has previously introduced natural fibre composite panels on its race cars, namely the 718 Cayman GT4 Clubsport.

Active aerodynamics are now a mainstay in modern motorsport, and the Mission R joins its ranks with a drag reduction system that is comprised of three louvres on each side of the nose section, in addition to the adjustable two-section rear spoiler. Elsewhere, the Mission R’s wheel arches are vented at the top, and the front wheels in particular have open rear sections to aid effective downforce.