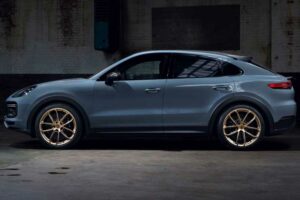 When Porsche unveiled the original Cayenne way back in 2003, brand purists nearly rose up in revolt. How could the iconic German sports car maker build—gulp—an SUV? Well, nearly two decades and a smaller SUV (the compact Macan), a luxury sedan (the Panamera), and the electric Taycan later, most have come around to the idea, or at least reached an uncomfortable detente with it. The Cayenne’s success (along with the Macan’s) has helped fund Porsche’s more beloved sports cars. Well, get ready to rip the band-aid off anew, because an even larger SUV is reportedly in the works.

This revelation comes courtesy of Automotive News, which says the new flagship SUV will arrive in Porsche showrooms by the end of the decade. Details are fuzzy, but the new product will be larger than the midsize Cayenne. Porsche fans should probably reach for their pearls now—because this mystery SUV likely will offer a third-row seat.

Porsche shared this news with its dealers recently. Apparently, the expectation is that the new SUV will arrive as a plug-in hybrid. Later, a fully electric variant could join the fold. For those curious what such a vehicle might look like, one dealer who saw a rendering of the future product shared with Automotive News that it appears to be a mashup of a sedan and a crossover, using the adjective “rakish.” We’ll wager a guess that the Porsche will be some sort of crossover coupe, with a fastback, low-slung body perched atop a higher-than-car ride height.

Those still coping with the Cayenne, Macan, and basically every other not-911 Porsche builds these days probably can’t be brought around to even make eye contact with this upcoming SUV. Everyone else, especially anyone who has enjoyed time behind the wheel of the über-athletic Cayenne, Macan, Panamera, and Taycan, will get it.

The Cayenne and Macan, as AN reminds everyone, pay the bills in Stuttgart. An even larger, higher-profit-margin three-row model would give customers runway to upgrade as their families grow, offering them the utility they need for mall runs and everyday tasks wrapped in an appropriately sporty package. That’s right—we highly doubt Porsche is prepping a swoopier-looking take on, say, a Honda Pilot or Nissan Pathfinder. This will probably splash onto the scene as the most athletic and satisfying to drive vehicle in its class by far, much like the Cayenne and Macan. So, next time you find yourself lusting after a new 911 GT3 or Cayman GT4 RS, you can thank give a little thanks to yet another allegedly blaspheming Porsche SUV.