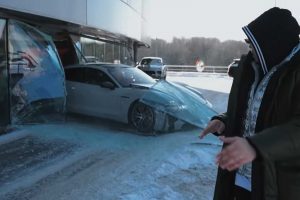 This brand new Turbo S is off to a rough start, all because of the owner’s hunt for YouTube clicks.

Russian vlogger Mikhail Litvin made the headlines last October by burning down his AMG GT 63 S Four-Door Coupe in a publicity stunt and to also send Mercedes a message. The swoopy high-performance sedan apparently had major reliability issues the dealer wasn’t able to fix, so his solution was to get simply rid of the car by setting it on fire.

That video uploaded on October 24, 2020, now has 21.5 million views on YouTube, and we have a feeling this new clip has all the makings of going viral as well. Uploaded only a couple of hours ago, it already has more than 1.3 million views on the social video platform and it shows Mikhail Litvin hopping behind the wheel of a brand new Porsche Taycan Turbo S.

Priced at 15,669,407 rubles (about $212,000 at current exchange rates), the fast electric sedan is off to a rough start as it was crashed straight on the dealership floor. The vlogger claims it all happened after he mistakenly hit the accelerator pedal instead of pressing the brakes, but we all know the real story here…. That’s actually his car and he decided to take delivery in a rather destructive way.

Our Russian is a little bit rusty, but Motor1.com Russia helped us figure out what’s going on at the start of the video. The three actors portray Stalin, Lenin, and Putin, with the latter telling Mikhail Litvin to live his life to the fullest, regardless of what the others say. The vlogger then enters the Porsche dealership and begins to literally sniff around before hopping behind the wheel of his Taycan Turbo S to wreak havoc.