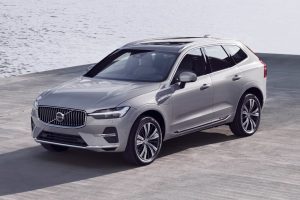 Updated SUV on sale now with new Google based interior tech; first deliveries due in June

Volvo has revealed prices for the refreshed 2021 XC60 SUV. The updated BMW X3 and Audi Q5 rival is available to order now, with the entry level B5 petrol in Momentum trim starting from £41,745.

That figure is a modest £765 increase over the price of the same car before the latest round of updates, with the facelift introducing a host of small design changes, improved interior technology and a more comprehensive list of driver assistance features.

All versions of the XC60, the best selling car in Volvo’s line-up, now benefit from a new infotainment set-up powered by Android Automotive – new software that sees the nine-inch portrait touchscreen integrated directly with Google apps and services, similar to the tech used by sister brand Polestar.

Hands free voice control functions are now handled by Google Assistant, navigation is provided by Google Maps, and further applications can be installed via the Google Play Store, accessed directly from the touchscreen. Buyers can subscribe to all of the new Google features through a subscription called the Digital Services Package.

Alongside the completely new infotainment technology, the XC60 gains new and upgraded hardware for the driver assistance systems, with a new sensor platform containing radars, ultrasonic sensors and cameras.

Volvo says that with the new sensor technology on board, the XC60 will boast better pedestrian and road user detection for use with the automatic emergency braking and steering intervention systems. Pilot Assist semi-autonomous driving will now provide what the company calls “gentle driver support” from a standstill up to motorway speeds.

Design changes for the XC60 are kept to a minimum. A new face with a revised grille and lower front bumper is joined by a selection of new paint colours and wheel options, but overall the visual upgrade is subtle. The interior can be trimmed in a selection of new leather-free upholsteries, including a new textile based option, called City Weave.

The engine line-up consists of the B5 petrol and the B4 diesel, both of which use a 48-volt mild-hybrid system. Above that sits the T6 recharge, a plug-in hybrid with 335bhp and a 32-mile electric-only range. The base model B5 sends its power to the front wheels only, with four-wheel drive an option. All other models get four-wheel drive as standard.

As before, two further trims sit above Momentum. Sporty-looking R Design starts from £44,410, while the range topping Inscription starts from £46,385 when paired with the B5 unit.

The T6 Recharge plug-in hybrid is offered in Inscription, R Design and Polestar Engineered trims. Prices range from £51,590 to £64,090 for the range-topping performance-focused model.