Production of the 2022 Ford F-150 Lightning Begins in April! 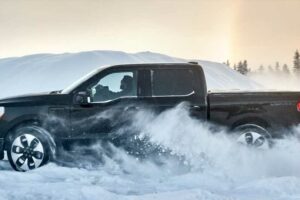 Ford from the jump has said it is going to start production of the 2022 Ford F-150 Lightning EV truck in Spring 2022, meaning… drum roll… it is perfectly on schedule. Dare we say, Ford is even a bit early, saying the first deliveries of Lightnings will begin April 26—before May, when it originally promised the truck would reach initial buyers—which is almost amazing. Shame on you for anticipating delays and supply chain issues, or the almost expected delays in a hotly anticipated product packing relatively new-to-its-maker tech.

That production is about to begin is irrefutable fact, because Ford and UAW leaders are going to host a Ford F-150 Lightning Job #1 shindig for customers and employees on April 26, 2022. If there’s no EV truck—”the first-ever full-size all-electric pickup to go on sale” according to Ford—well, that’s a mighty embarrassing faux pax that even unlimited champagne, fancy appetizers, and party favors can’t atone for. Not that we have confirmation of the champagne or fancy appetizers, but you get the point: Ford’s confidence about Job 1 is backed by a par-tay. The Rouge Electric Vehicle Center in Dearborn, Michigan, is going to be one poppin’ factory as it starts pumping out Ford’s EV truck before the month ends. Cheers. Pass the shrimp.

For those not contemplating what to wear to the Ford F-150 Lightning launch event, the whole thing will be livestreamed on Ford’s YouTube channel on Tuesday, April 26, at 1:30 p.m. EST. Ram and Chevy guys, tune in during work. Your Ford friends don’t have to know.

The 2022 Ford F-150 Lightning is going to beat its main competition—namely, GM and Ram—to production by a bunch. The Tesla Cybertruck? What Cybertruck? The Lightning came on strong, attracting 44,500 reservations in less than 48 hours in May 2021, when the order books first opened. By September, that number had grown to 150,000 and so on until December, when reservations for the electric F-150 were full, probably somewhere around 200,000 reservations.

The start of production is just that, the start. Unfortunately, a bunch of reservation holders are going to need to exercise patience. A lot of patience. Even if Ford can quickly ramp up production to 150,000 Lightnings per year, which obviously won’t happen in 2022, Ford won’t be able to build EV F-150s fast enough to satisfy its customers’ ravenous cravings.

The 2022 Ford F-150 Lightning starts just north of $40,000, with higher trims easily doubling that figure. Its dual motors fed by the extended-range battery should produce 563 hp and 775 lb-ft of torque, accelerate to 60 mph in the mid-fours, and have a range of 320 miles. Towing tops out at 10,000 pounds and payload at 2,000 pounds; it’ll have an independent rear suspension. On the inside, a 15.5-inch touchscreen and 12-inch instrument cluster will be offered. And there’ll be BlueCruise for hands-free highway driving. About 95 percent of the accessories available for the gasoline F-150 carry over to the EV Lightning.