Production Pininfarina Battista Hits US Roads For The First Time 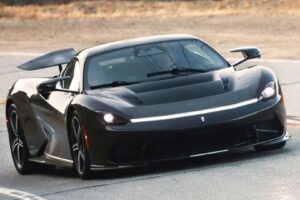 The gorgeous Pininfarina Battista debuted in concept form at the 2019 Geneva Motor Show. The company planned a limited production run in 2020, but you know, plans changed. Now Pininfarina is finally ready to deliver its high-end electric hypercar to customers worldwide, so to celebrate, the company decided to bring a production version of the Battista to California and unleash it on public roads.

The car pictured here is the very first production Pininfarina Battista, and the first time the car has (legally) driven on public roads in the US. Packing a 120-kilowatt-hour battery provided by Rimac and an electric motor on each wheel, the Battista produces a whopping 1,900 horsepower (1,417 kilowatts) and 1,696 pound-feet (2,300 newton-meters). All that oomph gives the Battista a 0-60 time of under 2.0 seconds and an impressive top speed of 218 mph.

“The Battista will provide a thrilling all-around experience on road and track – in the city and on the open road,” said Paolo Dellacha, Chief Product and Engineering Officer at Pininfarina. “To see the first production-intent example of our pure-electric hyper GT on the highways of California signals the beginning of an exciting new chapter in its development.”

Alongside the first production Battista, Pininfarina will also show the Battista Anniversario edition at Pebble Beach. The very rare Battista features special aerodynamic bodywork, unique visual touches to differentiate it from its base sibling, and is limited to just five examples worldwide. If you want a base Battista, though, that version will cost you a cool $2.2 million.