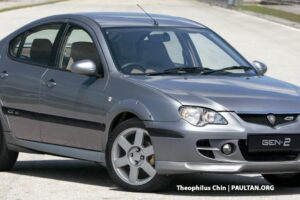 A little over three years ago, former Proton CEO Tengku Tan Sri Mahaleel Tengku Ariff revealed that there were plans for the national automaker to explore a wagon-bodied version of the Gen2, as well as a new generation model of the Satria Neo. There were many other plans in the pipeline, but a high-performance Gen2 was never part of the picture.

With that, rendering whiz Theophilus Chin took matters into his own hands and created the Gen2 GTi. It’s named exactly after what it is – a Gen2 fitted with Satria GTi parts. The shared components are plenty obvious – the hot hatch’s front bumper with integrated circular fog lamps is featured here in full, with the only difference being the grille design (unchanged from the pre-facelift Gen2).

You’ll also spot the black plastic strip running the length of the Gen2, complete with the “GTi 16V” badge on the rear doors. It does look a little out of place, perhaps because the original moulding was slimmer, had tapered edges, and was positioned slightly higher. The GTi’s riveted wheel arches find their way here, naturally, as have the iconic 16-inch six-spoke silver alloys. The actual car didn’t have yellow calipers, mind you, but these were borrowed from the masterfully rebuilt 2000 Proton Satria GTi by Dream Street Restoration.

Towards the back, you’ll spot traces of the actual hot hatch in the lower half of the bumper design, including the dual rectangular exhaust finishers. The tail lights featured here are taken from the final batches of the first generation Persona, while the boot spoiler is borrowed from the Gen2 CPS.

Since this is just a rendering, we’ll leave the powerplant to your imagination. Anyone will prefer having the Satria GTi’s fabled 4G93P 1.8 litre DOHC four-cylinder engine here, but if you get to make the call, what would be the engine of your choice? Tell us what you think of this rendering and your engine choice, below. You can also watch a sped-up version of the actual rendering in the video below.