Home » Proton X50 – over 40,000 bookings received for the SUV as of March, wait time now around six months – paultan.org

Proton X50 – over 40,000 bookings received for the SUV as of March, wait time now around six months – paultan.org 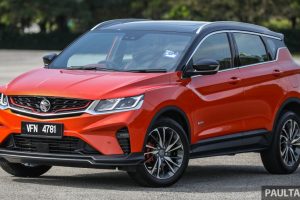 Over 40,000 bookings have been received for the Proton X50 up to the end of March. While that strong response has surpassed the company’s expectations for the B-segment SUV, it has also led to a rather significant backlog of orders for it, as The Edge reports.

As of last month, total deliveries of the X50 reached 11,654 units, with March deliveries amounting to 3,513 units. While monthly production has surpassed the 3,000 mark, the automaker says that there is still a significant wait time of six months for the car.

The company is attempting to address that shortfall by increasing production and by prioritising build, a Proton spokesperson told the publication. With higher-end variants accounting for 95% of the orders, the company said it is setting aside production of the Standard variant for the time being.

“The X50 Standard has had the fewest bookings, accounting for only 5%. Due to these circumstances, we decided to temporarily suspend bookings on the Standard variant of the X50 to focus on the larger population of bookings,” the spokesperson said. “While we want to be able to meet all our customers demands, the simple math of the supply and demand equation requires us to concentrate on the largest base of our X50 customers, which in this case is for the non-Standard variants. The bookings for all other variants continue as normal and we look forward to opening up for the standard variant when delivery is stabilised,” the spokesperson added.

He added that Proton is working closely with its vendors to increase capacity across the line. The 3,500 plus deliveries accomplished last month were above the initial planned capacity, but the company said that it is well on its way to increasing this number for the rest of the year.

“We are currently readjusting to ensure that we get optimum utilisation so as to meet the demand for both the X50 and the X70. Covid-19 brought great disruption to the automotive supply chain, which is predominantly in the Klang Valley, and the area most affected by the pandemic. This was a key choke point. However, we have been able to maintain steady levels of production since February and are on course towards increasing our output over the coming months,” the spokesperson said.

The automaker said its highest production model in 2020 was the Saga, which is built at its Shah Alam plant. This was followed by the Persona and X70, which are built in Tanjung Malim.