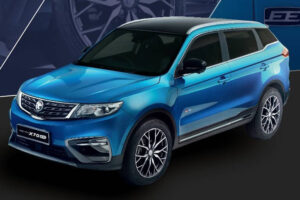 Proton has unveiled the new X70 Exclusive Edition in Brunei, which is being introduced in conjunction with the country’s 37th National Day this year. Corresponding to this, only 37 units of the limited-edition model will be made available, in a move that echoes the X70 Merdeka Edition that Malaysians got back in 2019 to celebrate our country’s 62nd year of independence.

The Exclusive Edition boasts a few aesthetic changes from regular X70 variants, including a two-tone exterior that sees a new blue finish being paired with a black roof, side mirrors and rear spoiler. Besides the unique paintjob, the SUV also receives an “EE” emblem on the tailgate and 19-inch wheels, the latter similar in design to those fitted to the Geely Boyue Pro.

As for the interior, the Nappa leather upholstery now comes in black rather than brown as in other variants. Beyond that, the rest of the cabin appears to remain unchanged from before.

Similarly, the engine remains the same 1.8 litre turbocharged and direct-injected four-cylinder petrol unit that serves up 181 hp (184 PS) and 285 Nm of torque. The mill is paired with a six-speed automatic transmission that sends drive to the front wheels.

There’s no mention of pricing just yet, but the order books for the Exclusive Edition are now open to customers in Brunei. More details will be revealed when the model is launched, which is said to take place soon.