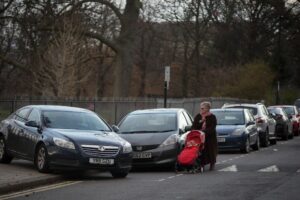 West Midlands police officers have asked the public to submit photos of cars that have been selfishly parked. The request comes amid huge driving fine changes being introduced across the country giving local councils more power to punish motorists.

Operation Park Safe was first launched by the West Midlands Police in 2018.

By 2019, the force received nearly 4,000 pieces of evidence and footage from the public.

As a result, “thousands” of motorists received fines for parking dangerously.

On top of that, a number of stolen vehicles were recovered as part of the operation.

And now, a West Midlands Police officer has renewed calls for the public’s help.

“These come above robberies and anti-social behaviour.

“Pavement and obstructive parking impact on people’s lives, especially those who are mobility or sight-impaired.

“For a very small investment, we are getting a big return.

“We’ve found that we don’t need to enforce the schemes ourselves.

“We tell parents, ‘if you have any problems send us photos and we’ll send the driver a ticket in the post’.

“Peer pressure takes care of things. If a parent drives into a School Street without good reason they’re going to dominate Facebook that evening.

“It’s a case of ‘anytime, anyplace, anywhere’. Someone else on that road who isn’t a police officer could be recording your behaviour and submitting it to us.

“Now that the public are reporting these badly parked cars we are getting lots of added value. With the public’s help, we can quickly turn up and remove these vehicles.”

The renewed calls come after local councils were given more power to fine motorists for driving offences.

The changes that came in at the end of May mean that local authorities across England and Wales have the power to issue Penalty Charge Notices (PCNs) for offences such as driving through no-vehicle entry points and stopping in yellow boxes at junctions and bus lanes.

If a motorist is caught by the CCTV they will be sent a fine of up to £70 through the post.

Other offences to look out for include making illegal turns and U-turns.

The measures are supposed to make roads safer for cyclists and help buses be more punctual, according to the Department for Transport.

It has been previously suggested by experts that the new measures could lead to an “avalanche” of PCNs for motorists.

Some experts are also concerned that money-stricken councils could use the powers for their financial benefit.

RAC spokesman Simon Williams previously said: “It’s right that councils outside London have the ability to enforce known rule-breaking hotspots, but we’re fearful that some authorities may be over-enthusiastic in using their new powers for revenue-raising reasons, to the detriment of drivers.

“While the Government has pledged to give councils advice on how best to let drivers know enforcement is taking place, what’s really needed is clear guidance on making sure enforcement is always carried out fairly.

“Drivers who blatantly ignore signage or highway rules should expect penalties, but there are instances which are not always clear-cut.”