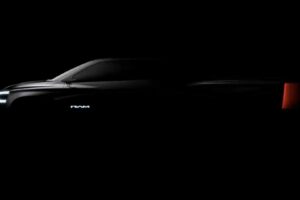 Ram wants to give a glimpse at its upcoming 1500 Revolution electric pickup with a concept early next year, not in November, 2022 as a previous report erroneously stated. It will show the 1500 EV in concept form, previewing the full production model that will be available one year later, in 2024.

The automaker published a press release confirming that it would be shown on January 5, at CES 2023 in Las Vegas. Even though Ram will be the last of the big three truck manufacturers to launch an electric model, the press release says it will “will once again redefine the pickup truck segment.”

The previous report, from the Detroit Free Press, suggested that Ram would show the concept just before start of the 2022 Los Angeles Auto Show, on November 17, but that doesn’t seem to be the case. Maybe Ram will bring something to the motor show that starts in about two weeks’ time, but it seems very unlikely that it will be the 1500 Revolution concept.

Ram also showed a new teaser now, showing the vehicle’s light signature and side profile, but without revealing any intricacies of its design. In fact, it is less revealing than previous teasers, which showed more of the vehicle’s flanks, hood, greenhouse and front fascia.

Ram will built the 1500 Revolution on the STLA Frame platform, which the manufacturer intends to use to underpin light commercial vehicles and smaller light-duty and larger heavy-duty pickups. Reports have suggested that it could have around 500 miles of range from a battery of over 200 kWh capacity; a smaller 159 kWh pack will be available and offer around 400 miles on one charge.

The most powerful version is said to have up to 885 horsepower, so it will be among the quickest electric pickups on the market. It’s also worth noting that it won’t be based on the current Ram 1500, but an all-new model which will be shown at about the same time with very different designs between ICE and EV versions of the truck.