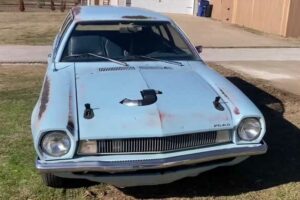 The Ford Pinto has a bad reputation largely because of the scandal in the 1970s regarding the fuel tank exploding in a rear-end crash. Today, the lack of enthusiasm for them makes these models an inexpensive starting point for building a fascinating hot rod. The one in this video packs a turbocharged LS V8 under the hood.

According to the builder, he is only the third owner of this Pinto Wagon. The blue paint is original, but the reddish primer is coming through in spots. He believes that the odometer is accurate by showing just over 26,000 miles.

The turbocharged LS V8 from General Motors is a tight fit in the engine bay. That’s not too surprising since the original powertrain choices include several four-cylinder mills and the Ford 2.8-liter Cologne V6.

While the exterior looks ratty, the interior is pretty nice. The seats and dashboard now have diamond-shaped quilting. The carpets are original. At the back, the spare tire area now holds the battery.

The big, turbocharged V8 has no problem moving the Pinto. The current tune includes just five pounds of boost and a rich fuel mixture to limit the power. Still, blipping the throttle can easily spin the tires.

When driving normally, the modified Pinto looks like a nice cruiser. It runs on 91-octane pump gas, and the builder could easily tune the engine to make more power by tweaking the turbo’s boost, engine timing, and fuel mixture. Plus, as a two-door wagon, there’s plenty of room to haul passengers or gear.

The video also showcases the Pinto on a lift to display the undercarraige. The car now has four-wheel disc brakes and a modified fuel tank. A transmission cooler is beneath the rear seats. There need to be some adjustments because the rear end housing is flexing under hard acceleration causing it to hit the floorboard.