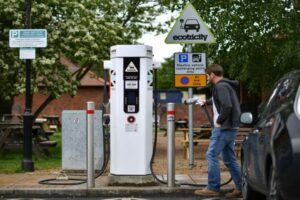 The Competition and Markets Authority (CMA) have called on the Government to ensure the charging sector works well now and in the future. The UK Government has pledged to ban the sale of all new petrol and diesel cars by 2030 in order to reduce carbon emissions.

As part of the Transport Decarbonisation Plan, the Government confirmed that diesel lorries would be banned 2040, with new hybrid cars being banned in 2035.

But the CMA does not think this is enough, and have recommended that the Government set out an ambitious national strategy for EV charging between now and 2030.

They have also advised the Government to support local authorities to boost roll-out of on-street charging.

This would include a comprehensive plan to allow local authorities to take control of the roll-out in their area, including setting up the network.

Andrea Coscelli, Chief Executive of the CMA, highlighted the importance of a drastic change.

She said: “Electric vehicles play a critical role in meeting Net Zero but the challenges with creating an entirely new charging network should not be underestimated.

“Some areas of the roll-out are going well and the UK’s network is growing – but it’s clear that other parts, like charging at motorway service stations and on-street, have much bigger hurdles to overcome.

“There needs to be action now to address the postcode lottery in electric vehicle charging as we approach the ban on sales of new petrol and diesel cars by 2030.

Tesla to open Supercharger network to all electric vehicles [ANALYSIS]

“Our recommendations will promote strong competition, encourage more investment, and build people’s trust, both now and in the future.

“The CMA has also opened a competition law investigation into EV charging along motorways and will continue to work with government and the industry to help ensure electric vehicle charging is a success.”

The investigation is looking into Electric Highway, who provide 80 percent of all chargepoints at motorway service stations.

There are concerns that they are creating a monopoly and making it difficult for other operators to provide competing chargepoints.