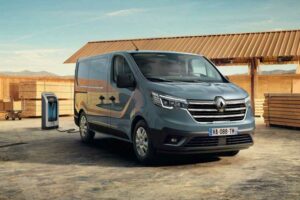 Renault has revealed the first all-electric version of the Traffic Van and it features the same motor as the Kangoo and Master E-Tech Electric models. That means it comes with a 52 kWh battery pack (the same as in the Master E-Tech Electric), a 90 kW (120 horsepower) front-mounted electric motor and it can be had in two length variants or as a cab-floor model.

The Renault Traffic Van E-Tech Electric, to give its full name, is available in 5.08-meter and 5.48-meter lengths, as well as in two height variants, and its cargo storage volume ranges from 5.8 cubic meters (205 cubic feet) to 8.9 cubic meters (314 cubic feet). On the long wheelbase version the load compartment length can be optionally increased to 4.15 meters thanks to what Renault calls a “long-load” trapdoor that basically allows for longer items to be slid further forward in the vehicle.

This last feature makes it unique among its European rivals, although it isn’t quite as good at carrying lads as the diesel version of the Traffic Van. The E-Tech Electric variant can carry up to 1.1 tons and tow up to 750 kg, which is just shy of the diesel’s 1.17 tons and 866 kg.

The electric Traffic’s claimed WLTP range is 240 km (149 miles) and the battery pack comes with an 8-year or 160,000-km warranty. Unless you specify the optional 50 kW DC fast charger module, this electric van will only charge at up to 22 kW no matter what charger you plug it into; its single-phase on-board AC charger peaks at 7 kW. If you don’t get the upgraded charger, then you will have to wait for this relatively small battery pack to reach 80 percent in 40 minutes.

Drivers are able to select between three regenerative braking modes, which is especially important for regaining range in mountainous or hilly areas. There is of course also an Eco mode which Renault says is needed in order to come close to the claimed range feature, although it does affect performance and top speed.