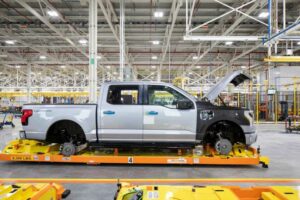 According to a topic on the f150gen14.com forum, the company’s representatives said at a Ford webinar – Drive Electric TN, that the F-150 Lightning order banks for both retail and fleets will be open in January 2022.

It would be an important bit of news for thousands of reservation holders, but once InsideEVs reached out to Ford, we heard that nothing has changed – the order bank timing has not been communicated yet.

As we know, the electric pickup from Ford is in the final stage of preparation for series-production at Ford’s new Rouge Electric Vehicle Center (part of the Ford Rouge Center) in Dearborn, Michigan with a target to start series production in Spring 2022. The start of customer deliveries is also expected in Spring 2022.

However, according to the forum info, the production might actually start in June. Since Spring astronomically runs from March 21 to June 21, it technically would not be a delay, but it would make us a little bit disappointed to start at the very end of the Spring.

We all remember how – a few years ago – Volkswagen waited with the launch of the ID.3 till the very end of Summer in September.

Not only that. The customer delivers – according to the forum – will start in September. That would be some 10 months from now before first customers will enjoy the Ford F-150 Lightning.

“While this was mostly focused on fleet talk, the one big relevant reveal for us retail order holders is when Ford representatives James Morgan and Nathan Gyori provided this timeline for Lightning ordering, production and deliveries. Unfortunately, deliveries have slipped from the original Spring estimate to now September.

Ford officially sticks to Spring 2022 so let’s treat it as a rumor and hope to see the first Ford F-150 Lightning on the roads in the March-June window.

Anyway, Ford is expected to be the first large OEM with a mainstream electric pickup on the market (excluding the recently launched premium Rivian R1T and the extraordinary GMC Hummer EV pickup that is coming soon).

Considering the latest announcement about doubling its EV effort to 600,000 BEVs annually within two years (by the end of 2023), we assume that maybe even 160,000 Ford F-150 Lightnings will be produced per year in 2-3 years.