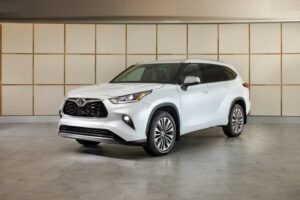 The 2023 Toyota Highlander mid-size crossover will no longer come with the 3.5-liter V-6 engine that suburban families all over North America expect in their three-row SUV. This year, the top engine is a new 265-hp 2.4-liter turbo-4 producing 310 lb-ft of torque. It’s paired with an 8-speed automatic transmission powering the front wheels, or all four.

The Highlander’s offered a V-6 since its launch in 2001, but increasingly stiff corporate average fuel economy and tailpipe-emission rules have deemed it too thirsty. The gain in EPA combined fuel efficiency rating is only 1 or 2 miles per gallon, from 23 mpg in 2022 for the V-6 with either front- or all-wheel drive to 24 mpg this year for the new turbo-4 paired with AWD, or 25 mpg in base FWD form. The 36-mpg Highlander Hybrid continues essentially unchanged.

Though it’s down 30 horsepower on the V-6, which was rated at 295 hp, Toyota says the maximum torque from the turbo-4 is up 17 percent from 263 lb-ft of torque. Even with the smaller engine, Toyota stresses the Highlander’s towing capacity of up to 5,000 lb is unchanged—an important spec for buyers, it says. The Hybrid can tow up to 3,500 lb.

Not a lot else has changed in the Highlander this year: 2023 models now include two 12.3-inch screens: one for the instrument cluster, replacing a 7.7-inch digital display, the other a central touchscreen for multimedia. Those trims now also have power folding exterior mirrors as standard. The larger digital cluster is optional on XLE and XSE grades, while the low-end L and LE models upgrade to the 7.7-inch cluster from last year’s 4.2-inch version. For 2023, the base FWD Highlander starts at $37,755 and the Highlander Hybrid at $41,555; both prices include a mandatory $1,335 delivery fee. 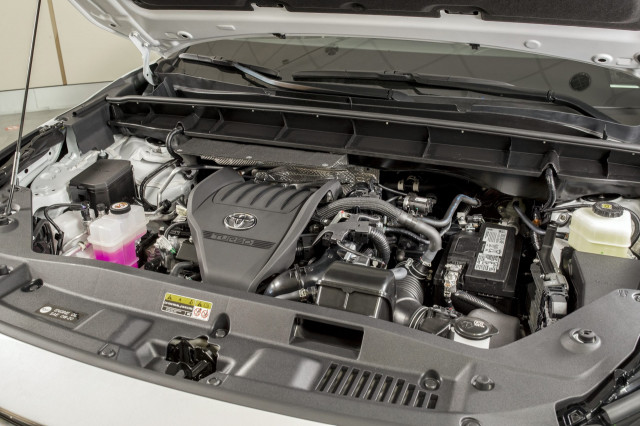 To be perfectly honest, many buyers of the 2023 Highlander may never know they’ve lost the V-6 unless they ask—which they probably won’t. The new turbo-4 is pleasantly responsive above about 3,000 rpm, though only average below that. In other words, parents who keep their foot in it can move their kids among after-school events expeditiously.

They’ll find the turbo Toyota Highlander gets noisy above 4,000 rpm, however. At least in part, this is a result of the great strides many automakers, including Toyota, have made in suppressing noise, vibration, and harshness at lower engine speeds. The difference between an all-but-silent idle and a full-on acceleration run is much greater than it was 10 years ago. That’s a disincentive to drive the Highlander hard, which if nothing else should keep the effective gas mileage up.

The company now builds roughly a quarter of a million Highlanders a year in Indiana and exports them all over the world. It knows the SUV’s market, and we’re pretty confident this new engine won’t upset buyers or ripple the demand curve.

Our test vehicle was a 2023 Toyota Highlander XSE AWD in a rich metallic white called Wind Chill Pearl, with a Cockpit Red interior. As the top model in the Highlander SE/XSE “sporty appearance” line of trims, it included 20-inch machined alloy wheels, lots of power accessories, and an optional 12.3-inch touchscreen infotainment interface with a JBL Audio system powering 11 speakers. The bottom line on our vehicle was $48,075, including the delivery fee. Dealers across the country are now adding significant surcharges to recommended sticker prices, so shop with caution.

Toyota provided airfare, lodging, and meals to enable The Car Connection to bring you this test drive review.